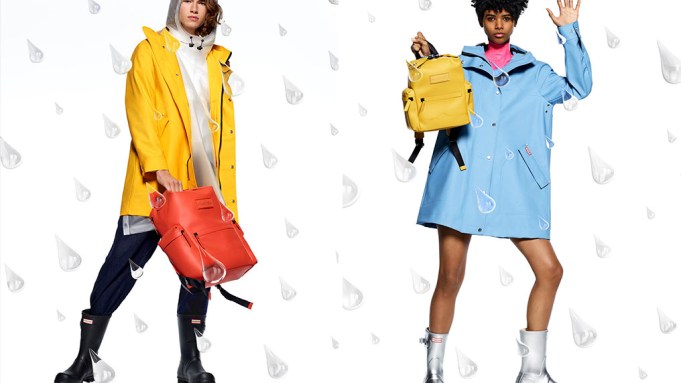 Who knows how many pairs of Hunter’s famous rubber wellies walk through Grand Central Terminal on an average rainy day in New York City? The brand is entering Grand Central in a more polished and ambitious way for four days with a pop-up shop in Vanderbilt Hall from Oct. 22 to 25 set up like a traditional glass greenhouse complete with mist and moss to bring a bit of Scotland to New York City. All the better to show Hunter’s raingear in its natural habitat.

The brand’s creative director Alasdhair Willis is aware that many New Yorkers are probably unaware that Hunter was founded in Scotland by an American named Henry Lee Norris in 1856. “Despite the familiarity with the brand we realized that our heritage and our birthplace were something that many did not know about, but we think would be interested to find out about,” said Willis. “We wanted to contrast the grandeur and magnificence of Grand Central Terminal with a minimalist architectural installation capturing the essence of the Highlands, contradicting its surroundings and really standing out amongst the frenetic environment of so many passing through the Terminal each day.” The U.S. is the company’s biggest market.

Hunter’s product range extends well beyond boots, and the greenhouse will display its Core Concept collection, which includes the Original Tall Boot, as well as rubberized outerwear, lightweight vinyl outerwear, the Original Backpack as well as new layering jackets and vests.