The brand collaborated with the duke’s family on a collection marking the anniversary of the Battle of Waterloo. 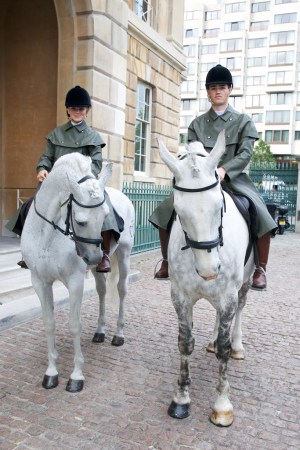 FIELDWORK: Apsley House, the grand townhouse and official London residence of the Duke of Wellington, is widely considered one of the most prestigious addresses in the British capital. It was also the venue Monday for the launch of Hunter Boots’ latest collection for Hunter Field, the performance-driven side of the brand.

This week marks the 200th anniversary of the Battle of Waterloo, in which the British beat the French army under the first Duke of Wellington, from whom the Wellington boot takes its name. Hunter collaborated with members of the current duke’s family on the collection for Hunter Field.

“It was really exciting to work with the family and also having access to the archives and the 200-year-old boot actually worn by the [first] duke,” said Hunter’s creative director, Alasdhair Willis, adding that the heart-shaped vamp and the scarlet heel were taken directly from Wellington’s original boots, which are housed in a glass case in Apsley House.

The collection, called Duke of Wellington by Hunter Field, made its debut earlier this week during London Collections: Men. It was created with help from the Earl and Countess of Mornington, or Arthur Wellesley and his wife, the former Jemma Kidd. Wellesley is next in line to become the Duke of Wellington.

Aimed at both men and women, the all-purpose equestrian collection features riding and jodhpur boots, in both rubber and leather versions. There is also weather protective, technical outerwear, such as a knee-length, wind and waterproof cavalry coat complete with magnetic fastenings, field jackets and a gilet.

Later this week, there will also be a re-enactment of the famous painting by William Salter that hangs in Apsley House and depicts the banquet given by the first Duke of Wellington to celebrate his victory.

“We’re recreating that exact banquet with the descendants of all the people in the original painting,” said Wellesley. “There were no women at the original dinner, so my wife, mother and three sisters aren’t invited. We wouldn’t get away with this at any other time, but if you’re going to respect the tradition, you’re going to do it properly.”