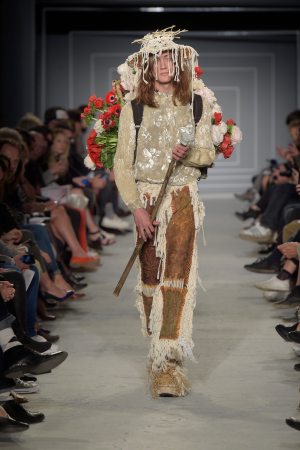 While Wataru Tominaga took home the grand prize, here’s a look at the other Hyères 2016 winners.

Prize: Chloé prize, for which each designer is invited to create a silhouette in the spirit of Chloé. It comes with a grant of 15,000 euros, or $16,829 at current exchange.

The duo also received a jury’s special mention for their men’s wear collection.

“We used the materials from the area we live in; many of them were thrown away,” Jurmu explained.

“When we started two years ago, I was very interested in the self-sufficient living of Lasse Nordlund, who lives in the forest of Finland,” added Vartiainen.

Praise: “Hanne and Anton both possess an authentic bohemian spirit and a great sense of humour, which shines through in the way they have crafted their Chloé silhouette with nonchalance and modernity. They have applied a true artisanal savoir faire that radiates youth, freedom, and a natural elegance,” said Chloé president Geoffroy de la Bourdonnaye.

“I find them extremely smart, visionaries and honest. I love this idea of condensing time and space in a radical proposition. The question of sellability doesn’t matter. They’re bold and for that reason, I think it can be interesting from a commercial perspective,” said Mathias Ohrel, founder of m-O, a recruitment firm in the luxury sector.

“They take us to another planet,” said designer Pierre Hardy, a jury member. “It could seem theoretical but it’s done with grace and elegance.”

Education: She will graduate from the Royal College of Art in London in June.

Work: She sent out a black draped dress, and silk outfit and fitted trousers. “I decided to call my collection Form Flow because I wanted to capture gravity in my clothes. I did a lot of draping,” Svart explained.

Praise: “I really liked her work on the backs. Her work reminds me of Bouchra Jarrar. It’s elegant and refined,” said Pascale Mussard, founder of Petit h, the Hermès range crafted from discards.