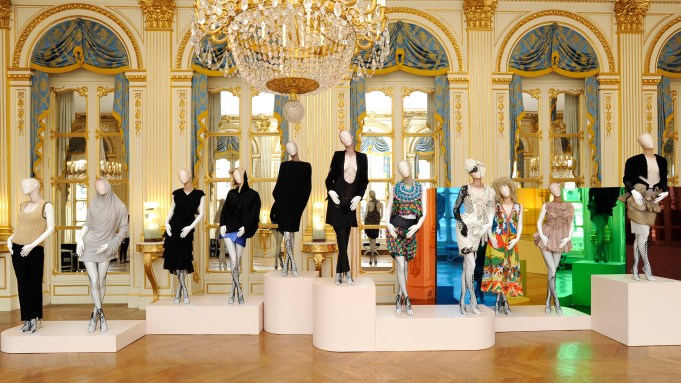 ROYAL TREATMENT: Milan has officially passed the baton to Paris. While Paris Fashion Week doesn’t start officially until Tuesday, it felt like a kickoff on Monday when France’s minister of culture and communication Audrey Azoulay inaugurated an exhibit dedicated to Hyères International Festival of Fashion and Photography at the ministry.

“The stakes of fashion are the stakes of the culture minister,” said Azoulay, noting that the fashion sector employs 700,000, generates a turnover of 150 billion euros, or $168.32 billion at current exchange, and is a factor of French excellence around the world.

She revealed that she commissioned Olivier Saillard, director of the fashion museum at the Palais Galliera, to create a report on the state of fashion heritage and also confirmed the organization of a Fashion Forum at French politician Lyne Cohen-Solal’s recommendation, which is slated for the end of the year. “It’s to gather all the players of the sector, to create a strategy, including on accompanying young designers when they start their own label,” she said, adding that she’s hoping to attend shows this week. (She wouldn’t have to go too far for the Isabel Marant show Thursday, whose venue is the gardens of the Palais Royal, below the ministry’s windows.)

The Hyères showcase features 18 designs of winners and finalists of the festival from 1997 to 2015 in the ministry’s staircase and salon, including those of Anthony Vaccarello, Julien Dossena, Stéphanie Coudert and Felipe Olivera Baptista; plus seven silhouettes by the 2016 winner Wataru Tominaga, behind windows under the Palais Royal arcades.

“We selected designers who are showing or have news,” festival founder and director Jean-Pierre Blanc said. He was speaking in front of the silhouettes that Vaccarello and Dossena created a decade ago for the competition. (Vaccarello is to show his first collection as Saint Laurent’s new creative director on Tuesday, while Dossena is to present his creations on Thursday as Paco Rabanne’s creative director.) Blanc unveiled the creation of a new accessories prize and a photography prize dedicated to still life for next year’s edition of the festival, which is scheduled to run from April 27 to May 1.

Didier Grumbach, Pascale Mussard, Caroline de Maigret, Audrey Marney, Nathalie Dufour and Geoffroy de La Bourdonnaye were among attendees at Monday’s event, as well as a roster of designers including Tominaga, Christine Phung, Léa Peckre, Yiqing Yin, Annelie Schubert and Kenta Matsushigue. “It’s beautiful to see that in the silhouettes of the Hyères designers there are already all the elements of their collections to come,” said Phung, who is to present her first collection on Oct. 3 as the director of creation at Leonard. Meanwhile, Peckre is skipping the shows for the first time for her namesake label this season to focus on other projects that she wouldn’t disclose. “It feels a little weird not to show but it’s not bad. I’ll go to my friends’ shows instead,” she said.

For his part, Tominaga is currently working on his collection with Chanel Métiers d’Art that he’ll present at the upcoming festival’s edition and on a capsule collection for Petit Bateau that also will hit stores in late April, to coincide with the festival. (Chanel and Petit Bateau are among major sponsors of the festival.) The London-based designer plans to relocate to Paris in November. “I want to be closer to the ateliers. I am excited, so many things are happening,” he said.

Visitors who sign up for it can see the display on Thursday, from 4 to 8 p.m. Paris time.