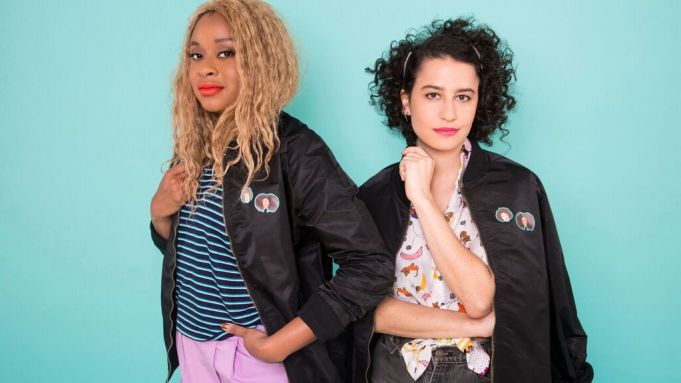 Glazer, best known as a co-creator and costar with Abbi Jacobson of the TV show “Broad City,” and Robinson, a comedian and writer who founded and cohosts with Jessica Williams the podcast “2 Dope Queens,” have created a limited collection of apparel with Wildfang, a women’s brand inspired by men’s wear with a feminist bent.

The mini collection — made up mainly of T-shirts, a tote, a hat and a bomber jacket that will be sold through Wildfang’s web site — features images of Glazer and Robinson, along with “Yaaas Queen Yaaas,” the long title for their upcoming and already sold-out YQY Comedy Tour.

The phrase is arguably one of the breakout moments of “Broad City” — memes, gifs and hashtags have all been made in its honor since the first network season of the show aired in early 2014 on Comedy Central. But Glazer and Robinson are quick to debunk any perception that they coined the term.

“As far as I know, the phrase ‘yaaas queen’ originates from queer people of color in the Eighties — drag ball culture and that vogue-ing tip,” Glazer said. “It’s definitely trickled into the intersectional feminist movement today.”

But she admitted, with characteristic frankness, that “it was able to pop off as a mainstream phrase through ‘Broad City’ because Abbi and I are white, and celebrating queerness is seen as more acceptable through white people.”

Robinson also took note of “yaaas queen’s” existence “long before I ever heard of it.” She connected the newer popularity of the phrase to an unfortunate history of “people of color being on the forefront and then forgotten about when something catchy goes mainstream.”

Internet culture has a way of stripping context and credit wherever possible, but Robinson pointed out that “yaaas queen” is a term of positivity and support and said it “just makes me excited and cheers me up.”

The happy zeal of the phrase also comes through in the images featured throughout the line, done by Robin Eisenberg, an artist based in Los Angeles, whose drawings are clear and colorful but have an edge, like an ultra-psychedelic version of Lisa Frank.

Eisenberg referred to Glazer and Robinson as “the coolest people ever” and, although the YQY looks are Eisenberg’s first step into apparel, she’s starting to work on some of her own clothing designs.

The bubbly weirdness of Eisenberg’s work lends itself perfectly to the YQY tour, which seems to have materialized simply because, even after a decade of friendship that sparked on the stand-up scene, Glazer and Robinson discovered they were both game.

“We have partners in other projects who don’t do this type of touring, so when we realized we were both down for this kind of challenge, we knew we’d pair perfectly,” Robinson said.

“If I were headlining alone, I’d be nervous,” Glazer said. “But, because I’m going to be with my girl, one of my best friends eva, I’m fearless. Sorry — phearless.”