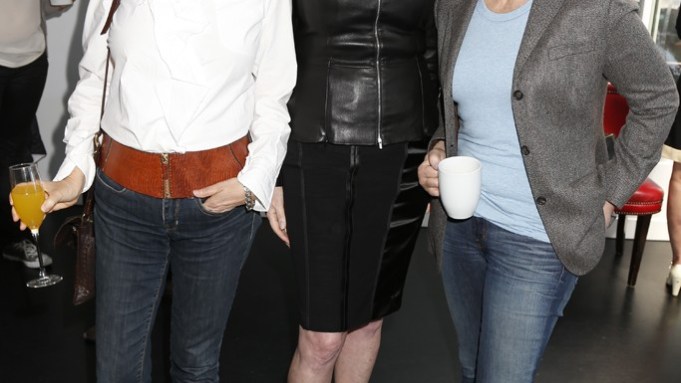 IN THE SPIRIT OF EPHRON: Nearly a year after her death, Nora Ephron still is on the minds of women in the close-knit film community. Jane Rosenthal, who cofounded the Tribeca Film Festival with Robert De Niro in 2002, has been hosting a women filmmakers brunch for the past decade. On Thursday, she told a room filled with guests such as Glenn Close, Marisa Tomei, Bryce Dallas Howard, Sandra Bernhard, Julie Taymor, Robin Roberts, Hannah Storm and Blythe Danner that she wanted to honor Ephron with an award given to a writer or director with a distinctive voice that embodies her spirit and vision. “One of my earliest supporters in the business was Nora Ephron,” Rosenthal said. “She was so smart and always had on a crisp Armani suit. I wanted to do something so she’d still be part of this festival.”

The $25,000 prize, which was funded by vogue.com, went to Meera Menon, whose film “Farah Goes Bang” is a road trip comedy about a woman in her 20s who tries to lose her virginity while campaigning in 2004 across America for presidential candidate John Kerry.

“We have so much credit card debt from making the film,” moaned Menon as she accepted the prize. “For our film, we’re trying to follow [Ephron’s] lead in taking issues that are kind of painful and fear ridden.”

Wearing jeans, a tweed jacket and loafers, Close said she’s about to film an ensemble movie, “Low Down,” in L.A., and is working on a project with Julie Lynn and Bonnie Curtis, producers of “Albert Nobbs.” “I’m trying to do theater,” she said. “I’d love to work with Julie [Taymor]. She’s basically a genius.”

Also on hand was Perri Peltz, the former news anchor-turned-documentarian, who said she is working on a film for HBO about De Niro’s father, who was an Abstract Expressionist painter. Storm, another news anchor-turned-director, is contributing to ESPN’s “Nine for IX” documentary series about compelling women athletes. Storm said her subject, basketball player Sheryl Swoopes, has been called the female Michael Jordan. “I’m looking to expand and do more films about women and girls telling their stories.”