The designer was celebrated at the Ralph Lauren store in London. 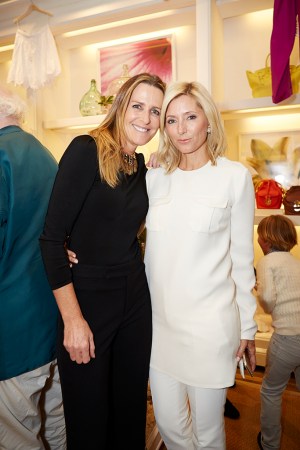 ISLAND HOPPING: India Hicks took over Ralph Lauren’s store on London’s Fulham Road Tuesday night, where the aristocratic designer hosted a party for her book “India Hicks: Island Style,” which was published late last month. The coffee-table book chronicles how Hicks, who lives on the idyllic Harbour Island in the Bahamas, developed the haute bohemian style that’s become her calling card. “I think the book sort of demonstrates how you can live life in the chaos — I have five children, we have loads of pets — and I think our house is above all a home,” said Hicks, in between hugging “hellos” to her siblings, cousins and nieces, while two of her five children, Domino and Conrad, scampered around. “It’s not about fancy decorating, and it’s not about a designed look, it’s very much about the character of us as a family,” she said.

And the designer — who is a goddaughter of the Prince of Wales — noted that she’d managed to write the book alongside launching her new lifestyle business, India Hicks London-Harbour Island, which spotlights bath and body, accessories and jewelry. “It’s like having a baby,” she said of working on the two endeavors at the same time.

Plenty of Hicks’ pals were in attendance, including Saffron Aldridge, Princess Marie-Chantal of Greece and Amanda Brooks, who all cohosted the party. Brooks admitted that Hicks’ enviable island style “[makes] you want to live there.” And the writer mused on how Hicks’ aesthetic relates to that of her late father, the interior designer David Hicks. “In some ways she’s adhered to [her father’s style] and in some ways she’s totally rebelled against it — she has a much more bohemian style, it’s more loose, it’s less about symmetry and order,” said Brooks.

Meanwhile, Brooks is also on the book launch trail, with her latest work set to be published June 2. The book, called “Always Pack a Party Dress,” is a series of stories about Brooks’ 20 years in the fashion industry. “It’s…a style memoir in a way, it talks about all the clothes I’ve worn and the stages I’ve gone through,” she said.