Ingie Chalhoub took a Fornasetti painting as the starting point for her spring 2016 collection. 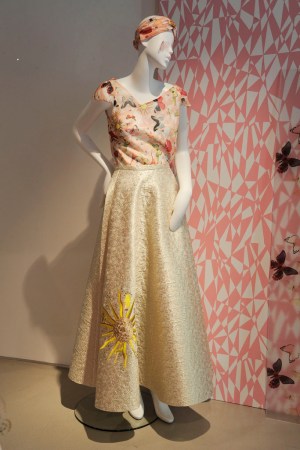 FLUTTER BY, BUTTERFLY: Designer and businesswoman Ingie Chalhoub put a symbolic slant on her spring 2016 collection of luxury ready-to-wear, presented Monday in Paris during the couture shows.

Taking a Fornasetti painting as her starting point, Chalhoub covered her eveningwear creations, which were the heart of the presentation, with prints and embroideries of butterflies, hearts, Eiffel Towers, pearls and suns.

“It’s about how you put all your fantasies into one print,” she said. “Butterflies represent the freedom of a woman; the heart is the heart of a woman, because women usually give a lot, and are always full of energy and blood.

“And because Ingie Paris is all made in France, it’s about the enchanting world of Paris, I wanted to put into it the Eiffel Tower; the pearl because Ingie means pearl; the IP for the logo; the sun, which represents the Mediterranean — it’s the sun of my country of origin,” she effused.

As an entrepreneur — Chalhoub is behind luxury retail firm Etoile Group, which holds the licenses for brands including Chanel and Valentino in the Middle East — expansion plans were not far from her mind.

The label, launched in 2009, is already stocked in around a dozen stores mainly in the region, launched e-commerce earlier this year and is now looking to expand abroad.

“I don’t want to go down the wholesale route,” Chalhoub explained. “First of all, we need our own stores.”

Paris and London are notably targets, she said, although specific locations have not yet been chosen.