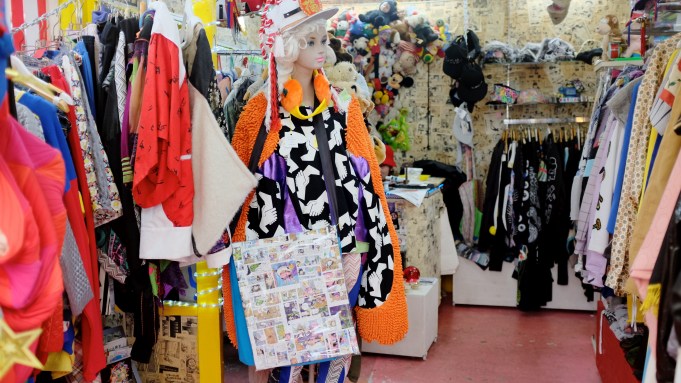 Down the winding, decrepit main road of Tokyo’s Koenji neighborhood sits the Kitakore building — a ransacked structure that has served as the city’s center for DIY fashion and retail for nearly a decade.

A 25 minute train ride from Shibuya, the historical multiuse building was once home to a curry shop, a public bathhouse and various trash receptacle rooms. Its current vendors rarely subscribe to Western retailing ideals. All appear to place an emphasis on art over commerce while utilizing unconventional merchandising techniques — creating an experiential destination.

Garments are mostly handmade by shop owners, hanging from ceilings and dangling from lengths of industrial chain. Most of the designers’ wares cost less than $1,000, with the majority priced at around $200.

Kitakore’s dilapidated two-floor structure was built pre-World War II — rendering it uninhabitable by most Japanese standards, a culture that values newness and frequently tears down buildings to comply with updated earthquake-proofing codes. Such disregard made Kitakore ripe for burgeoning artists – who took over the crumbling, abandoned building circa 2007.

It has become an amalgamation of tiny, independent shops and studios accessible by warped stairwells, fire ladders and corrugated steel garage doors — all independently operated. The autonomous spirit is fleeting, so much so that each visit to Kitakore could yield a different experience — dependent on which boutiques have decided to open that day.

One late Sunday afternoon visit found three of the five presently operating boutiques open. A onetime venerable labyrinth of underground fashions, Kitakore lost many of its inhabitants in the fallout from the massive 2011 Tohoku earthquake, which further rattled the already decaying building. It remains unclear if the building can jog a second-wind, returning to the alternative haven it once was.

Among those to hang on are boutiques like Hayatochiri — a ground-floor emporium of unisex reconstructed vintage clothing and accessories, designed by Goto Yoshimitsu.

Yoshimitsu was the first designer to move into Kitakore, and invited his friends to join the project, which is how a designer Southpaw Cathy came to open her shop called Nincompoop Capacity. Her wares meld dreamscape-type femininity with Japanese street fashion’s newfangled athletic context. The deconstructed drapy Nike T-shirts-as-dress hybrids she sews retail for $165.

In wading through shattered mirrors and debris left behind by past Kitakore tenants, and ascending a steep stairwell, one can access the studio and showroom of designer Ebata Koshiro’s line, Garter. The designer’s sculptural pieces, which he constructs in the windowless workspace, have been worn by Lady Gaga and Korean pop star CL.

Kitakore’s surrounding Koenji neighborhood has become Tokyo’s centrifuge for alternative creatives, whose lives in many ways mimic the spirit of Kitakore’s clothes.