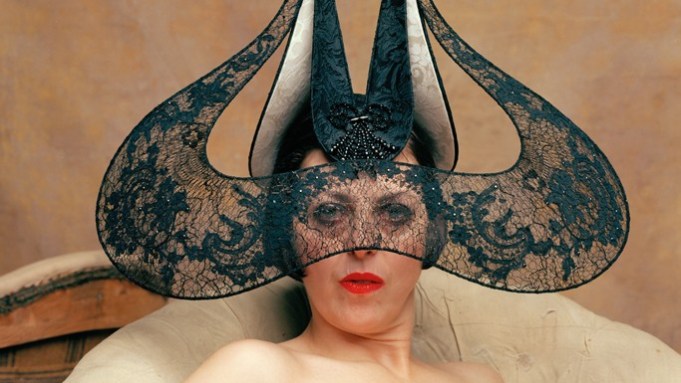 LONDON — Highlights from the late Isabella Blow’s wardrobe will go on display at Somerset House in London in November. An announcement is expected later today.

“Isabella Blow: Fashion Galore!” has been organized by the Isabella Blow Foundation and Central Saint Martins and will showcase more than 100 pieces from her collection.

The show will be curated by Alistair O’Neill with Shonagh Marshall and designed by the architectural firm Carmody Groarke, with installations by the set designer Shona Heath.

The show will be organized by theme, and will spotlight Blow’s aristocratic background; her early relationship with then fashion students Lee Alexander McQueen and Philip Treacy; her epic collection of shoes and hats; and her love of the British countryside.

“This exhibition is, to me, a bittersweet event,” said Daphne Guinness, a longtime friend who purchased Blow’s wardrobe after her death in 2007. Blow committed suicide at age 48 after years of battling depression.

Guinness is also the founder of the Isabella Blow Foundation, which raises money to promote fashion, and to encourage young and aspiring talent. It also funds selected charities that promote mental well being.

“Isabella…made our world more vivid, trailing color with every pace she took. It is a sorrier place for her absence. When I visited her beloved clothes in a storage room in South Kensington, it seemed quite clear the collection would be of immense value to a great many people,” Guinness said. “I do believe that in choosing to exhibit them we’ve done the right thing — and that it is what she would have wanted. I am doing this in memory of a dear friend, in the hope that her legacy may continue to aid and inspire generations of designers to come.”

Among the labels featured in the show, in addition to McQueen and Treacy, are Jeremy Scott, Julien Macdonald, Viktor & Rolf, Fendi, Escada, Prada, and Marni. Heath has created bespoke Blow mannequins that will wear full outfits once donned by the late fashion stylist and muse.

McQueen’s entire spring/summer 2008 collection, La Dame Bleue, which the designer and Treacy dedicated to Blow, will also be on show. The show is to run from Nov. 20 to March 2.