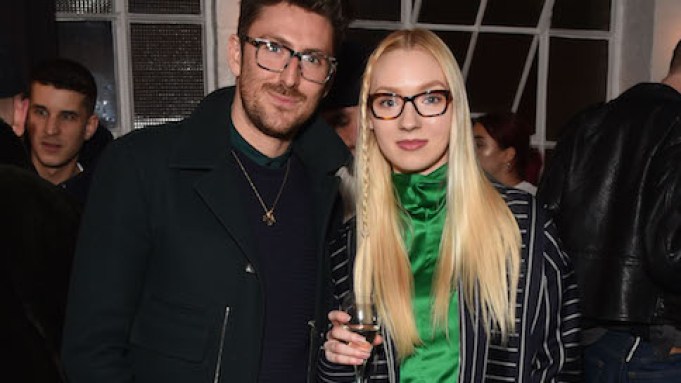 FFRENCH TWIST: Designers turned out in force at East London’s Bistrotheque restaurant this week to sample the latest creations of their friend and collaborator,  makeup artist Isamaya Ffrench.

The 25-year-old Ffrench, who was recently named U.K. ambassador of YSL Beauté, collaborated with the East London restaurant on a range of culinary cosmetics called Ffrench Pharmaceuticals.

The project culminated in a dinner hosted by Ffrench and Bistrotheque’s owners Pablo Flack and David Waddington.

“As soon as we met with Isamaya and she talked through her ideas we realized that this girl is it, she is a massive bomb of creativity and we have to do this event. It turned out to require a gargantuan effort, but it was well worth it,” said Flack.

The makeup artist trained as a chef five years ago, and the collaboration gave her a way to merge the two worlds.

“I’ve always loved cooking, and when I started speaking to Bistrotheque we came up with the idea of culinary cosmetics and also packaging everything to look like pharmaceuticals, because people are so obsessed with taking medicine and supplements or having Botox these days,” said Ffrench. “I also wanted to use ingredients which represent this blend of ideas, like collagen.”

To enhance the experience, Ffrench bleached all waiters’ eyebrows and dressed them in lab coats, latex gloves and surgical masks.

The six-course meal started with a “Layered Collagen BBLT,” a bright jelly served in a glass jar packaged like a face cream and eaten with a small cosmetic spatula. It was followed by a foie gras parfait packaged in a compact powder case, and a succulent main course of “(Bot)Ox Cheek” pierced with multiple syringes, which had been filled with cranberry sauce.

The dessert, an edible white chocolate lipstick, seemed to be everyone’s favorite.

“I’m actually saving it for later, it was too pretty to eat,” said Molly Goddard, who was taking a break following a busy week when she launched her space at the new Dover Street Market on London’s Haymarket. “Right now I’m focusing on production of our fall 2016 collection, but it’s great to take a break and enjoy a dinner with all my friends.”

“Isamaya has been doing the makeup for my shows for the last three seasons, so I had to come and support her. This is so interesting,” said Lo, who added that he would like to launch cosmetics in the future. In the near future, however, he’ll be traveling to Shanghai to stage a show of his fall 2016 collection.

Ffrench, who has previously collaborated with Junya Watanabe, Agi & Sam, Chanel and Nike, said she is working with the Italian label Fiorucci — acquired last June by veteran British retailers Janie and Stephen Schaffer — on its relaunch.