New York is getting ready for all things tennis as the U.S. Open approaches, kicking off on Aug. 29. 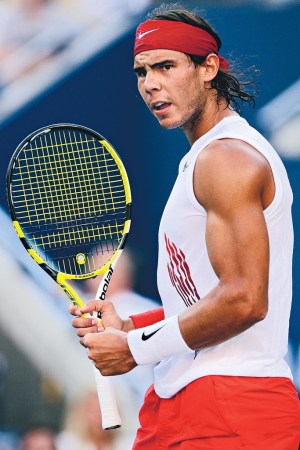 OPEN SEASON: New York is getting ready for all things tennis as the U.S. Open approaches, kicking off on Aug. 29. Rafael Nadal will no doubt pack the house on Thursday, Aug. 25, when he shows off his new Armani jeans campaign at Macy’s Herald Square flagship.

ISN’T IT RICH?: American billionaire Warren Buffett has a French ally in his quest to raise taxes on the superrich: Pierre Bergé. In fact, the Left-leaning former Yves Saint Laurent boss says he finds it “immoral” that the richest are taxed less than others. “I am not one of the megarich like François Pinault or Bernard Arnault. And I don’t want to send any tax collectors to their homes,” he told financial daily La Tribune on Thursday. “But above a certain threshold, we must raise the tax rates on high incomes.” Asked if he thought there was a chance France might impose a special tax on the rich to reduce its bulging deficit, Bergé replied: “That depends how many of the president’s rich friends give him a call.”

ON TO ATLANTA: Tyson Beckford, Kenny Lattimore and Judy Mauldin will honor Bethann Hardison and the late Willi Smith at a Sept. 6 SCAD fund-raiser in Atlanta. Called “A Night to Remember,” the event will include a runway tribute to the 1973 Grand Divertissement à Versailles, the groundbreaking show that Hardison walked in.

Michael Habachy of HGTV “Design Wars” will dress up the Atlantic Station for the shindig, which will also benefit Hardison’s documentary “Invisible Beauty.” Once partygoers have come and gone, the space will be used for Fashion’s Night Out pop-up shops including one for Frank Tell, who will be at the Sept. 6 party.

HONOR BOUND: The Hetrick-Martin Institute, the country’s oldest and largest LGBTQ youth-services organization, will honor Newark Mayor Cory Booker, Ralph Lauren’s chief of staff Charles Fagan and Macy’s at its 25th annual Emery Awards this fall. Booker is being honored for his commitment to equal rights, Fagan is being applauded for his efforts in his company’s Adopt a School program, and Macy’s is being singled out for its corporate leadership. The dinner will be held Nov. 10 at Cipriani Wall Street.