The 40-piece line will be carried at more than 450 Banana units in the U.S. and about 700 stores globally, as well as online. 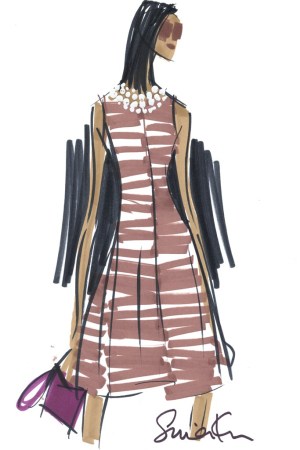 Design Theory: How Up Next Designer Is Finding the Next Big Thing in Fashion

ISSA’S NEXT MOVE: Issa London’s first brush with fame came in November 2010 when Kate Middleton, the Duchess of Cambridge, wore its royal blue wrap dress at St. James’s Palace when her betrothal to Prince William was announced. The London-based brand is about to raise its profile again with a collaboration with Banana Republic to produce a 40-piece collection launching on Aug. 6. The line will be carried at more than 450 Banana units in the U.S. and about 700 stores globally as well as online. Issa’s designer Daniella Helayel, who launched the brand in 2003, was inspired by Banana Republic’s safari heritage.

‘“We always love animal prints such as zebra and giraffe stripes,” said Simon Kneen, Banana Republic’s creative director and executive vice president of design. “Issa took that and modernized it. I love that the collection is our world and their world.”