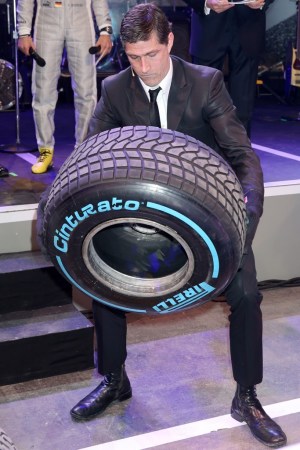 RATINGS BATTLE: It was Team “Lost” versus Team “Gray’s Anatomy” at the party staged by luxury watch brand IWC in Geneva, where top television stars competed in a Formula One-themed challenge.

The event has established itself as the social highlight of the annual Salon International de la Haute Horlogerie, or SIHH, and this time was no exception. Close to 800 guests thronged to the “Race Night” party on Tuesday, which celebrated the brand’s association with the Mercedes team and the launch of its new Ingenieur high-tech sportswatch range.

Celebrities including Ewan McGregor, Zinedine Zidane, Adriana Lima, Jean Reno, Boris Becker and Luis Figo attended the dinner, which was followed by a live performance by Jay Kay, a.k.a. Jamiroquai.

Diners found earplugs with their entrees as F1 ace driver Nico Rosberg raced into the vast exhibition hall in his deafeningly loud car. Master of ceremonies Kevin Spacey jokingly followed him onto the stage on a scooter. The double Oscar winner later exhorted celebrity friends of the brand to compete in a pitstop challenge.

Fox said he has a mechanical bent. “I always liked watches. When I was a kid, I’d have fun taking them apart,” the American actor told WWD, though he confessed he had some trouble reassembling the timepieces afterwards.

A trained and enthusiastic pilot, Fox will be seen in March in the movie “Emperor,” as a top U.S. general under Douglas MacArthur (played by Tommy Lee Jones). He also stars in the summer blockbuster “World War Z” opposite Brad Pitt.