Rob Brydon was master of ceremonies at the event that drew 700 VIP guests, including Hilary Swank, Christoph Waltz and Rosamund Pike. 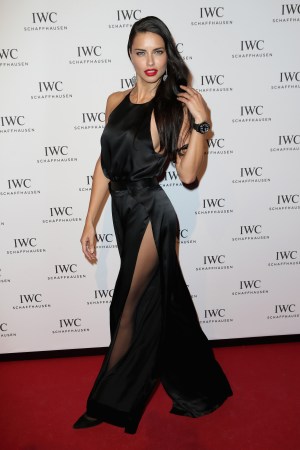 WATCH OUT: How far should a compère go in teasing his hosts to win a few laughs? British comedian Rob Brydon pushed it to the limit — and then some — at Tuesday night’s glittering IWC gala at this year’s Salon International de la Haute Horlogerie watch show in Geneva.

Cutting his teeth on Lewis Hamilton and Nico Rosberg, the eternally rivaled Formula One motor sport racing stars, he transferred swiftly to Arsène Wenger, the high-profile manager of Britain’s Arsenal soccer team, which is topping the Premier League. But hosting a “Come Fly With Us” song and dance extravaganza featuring former Boyzone lead Ronan Keating, jazz vocalist Patti Austin and many others, the best barbs were saved for the evening’s hosts.

The deepest cuts came after the lavish steak dinner. Berating Kern for not having been fed properly, Brydon said: “Why talk to the monkey when you’ve got the organ grinder?”

He was referring to Johann Rupert, the South African billionaire chairman and dominant shareholder of luxury group Richemont, IWC’s owner. Rupert, who generally prefers to keep a low profile, was ribbed about South Africa’s poor performance in the recent world cup for rugby, one of his passions.

At least the Hollywood contingent came off better. Hilary Swank, a recently added IWC “friend of the brand,” and Scott Eastwood, son of the legendary actor and director Clint Eastwood, were treated with kid gloves. It was left to ace villain and Quentin Tarantino staple Christoph Waltz to get the better of Brydon, replying with his customary dry wit to questions about his roles in the latest Bond film.

But even here Brydon secured the last laugh, alluding that in “Spectre” 007 escaped Waltz’ clutches thanks to his watch — as all those present knew without the compère having to say, an Omega, IWC’s archrival brand.