Emily Blunt, Natalie Dormer and Gwendoline Christie were among the guests. 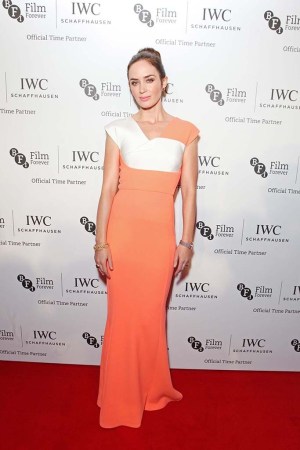 LONDON — Watchmaker IWC Schaffhausen threw a dinner in London’s Battersea Tuesday night, to celebrate the launch of its new Portofino Midsize watch collection. The event was also a showcase for a series of photographs — called “Timeless Portofino” — that Peter Lindbergh had shot of a clutch of actors, who numbered Cate Blanchett, Emily Blunt, Ewan McGregor, Christoph Waltz and Zhou Xun, to mark the launch.

At the London event, Blunt dished on what she called the “magical” experience of shooting in the gardens and on the shorelines of Portofino, in which the boldfacers appear wearing sleek tuxedo suits accessorized with the Portofino watches. “Being…in Portofino, where they just do life right, I remember driving home from the shoot and it was about 4:30pm and all the locals were out on the beach and I thought, ‘That’s the way to live’,” she said. But Blunt noted that there was some friendly competition to drive the Riva speedboat that she, Blanchett and Xun were shot in. “[Blanchett] didn’t let me drive,” deadpanned Blunt. But as a consolation, the British actress conceded that she had “first dibs on the watches,” thanks to arriving at the shoot early.

Also among the guests were actors Allen Leech, Tom Felton, Douglas Booth, Michael Pitt and Olga Kurylenko, along with Erin O’Connor, Charlotte Dellal and Julian Fellowes. Designer Giles Deacon arrived with his girlfriend and “Game of Thrones” actress Gwendoline Christie, while her fellow “Game of Thrones” star Natalie Dormer was also in attendance.

Meanwhile, London designer Emilia Wickstead turned up with her husband Daniel Gargiulo — but confessed that she hadn’t relished facing the phalanx of red carpet photographers. “They kept asking me to turn sideways and I’m four months pregnant, so I just look like I have a pot belly,” she said, adding that her expectant state had made preparations for her London Fashion Week show in September a little fraught. “I was really sick and not thinking straight. I scrapped a cape story for the show and wondered why days later,” she admitted.