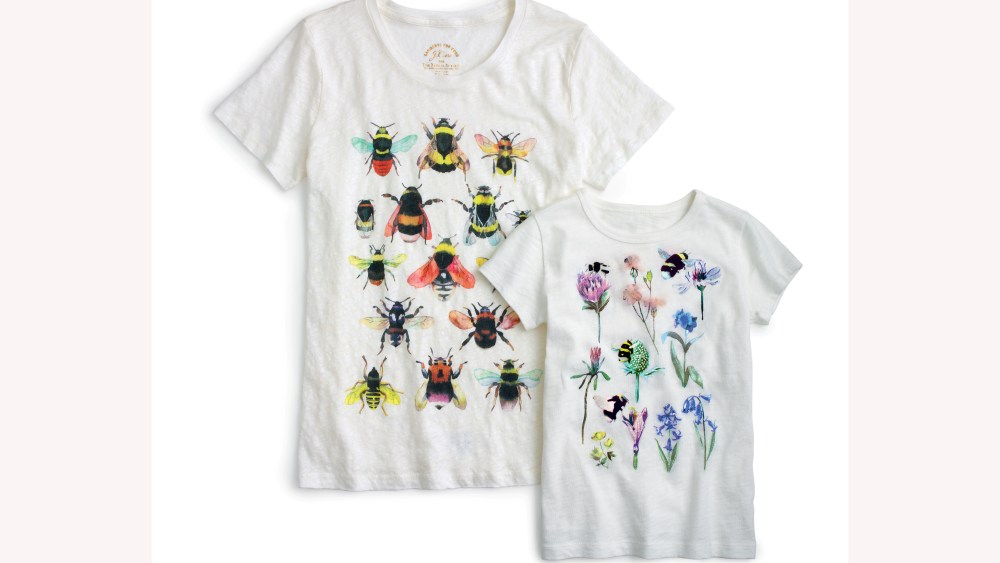 BEE CAUSE: J.Crew has collaborated with the British illustrator Marcel George to create a capsule collection for its annual “Save the Bees” campaign.

The collection consists of women’s and children’s T-shirts and a pocket square for men, all featuring George’s hand-painted watercolor illustrations of a variety of bee species.

“I worked with Jenna [Lyons, J. Crew’s creative director], who gave me an open brief and the freedom to create anything I wanted, to highlight the Save the Bees program. I chose to concentrate on the diversity and beauty of the different bee species and also the wildflowers which they pollinate,” said George.

“To get up close to some bees in real life, I went to The Horniman museum and Gardens in London, where they have a working beehive. I discovered there was a great deal of subtlety and complexity in the coloration of bees, which you would miss from looking at photographic references alone.”

The campaign is part of the company’s “Garments for Goods” program and aims to highlight the issue of the declining bee population and their impact on the global environment.

Launched in 2014, the label has collaborated with the British artist Emma Hill and New York-based illustrator Donald Robertson for past campaigns. Last year, J. Crew had also partnered with London’s Geffrye Museum of the Home to install colorful beehives in its gardens as part of the ongoing campaign.

George, who said he appreciates J. Crew’s history of working with great illustrations and its “simple and classic feel,” will continue to work with the label on their main line.

Lyons said the company has “always looked for artists that have a distinct and unique hand and Marcel’s animals have a beautiful, earthly quality, while still being magical. We were very excited to work with him and have commissioned him to do more motifs for the main line.”

Prices range between 24.50 pounds, or $35, and 45 pounds, or $64, and 50 percent of the proceeds will go towards the conservation charity, Buglife and Xerces Society in the U.S., a non-profit organization that protects animal wildlife. The collection will launch in J. Crew stores globally, as well as online, on April 22 to coincide with Earth Day.