Anyone that wants to say “Thinking of you, but not in a creepy stalker kind of way” will have a new way to say it with the collection of cheeky greeting cards. 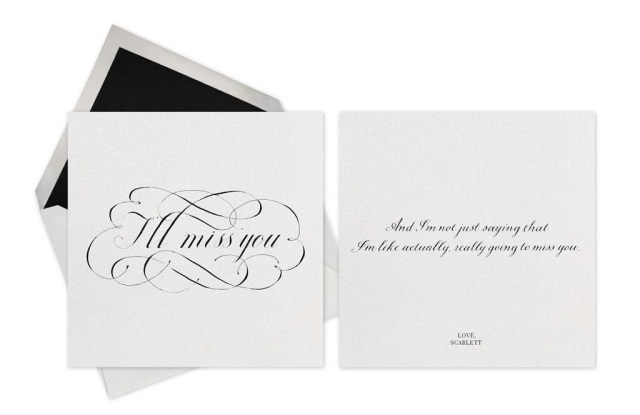 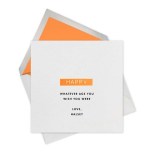 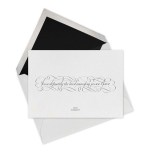 FOR THE UNCONVENTIONAL: Anyone that wants to say “Thinking of you, but not in a creepy stalker kind of way” will have a new way to say it with the new greeting card collaboration between Paperless Post and J. Crew, which launches today. The go-to destination for online invitations, whose past designer collaborators include Oscar de la Renta, Kate Spade and Jonathan Adler, has tapped the retailer for a new partnership of cheeky cards and invitations, ranging from thank yous (“You shouldn’t have — but I’m so glad you know I don’t mean that”) to birthdays (“Happy whatever age you wish you were”) to the more general (“You’re definitely the least annoying person I know.”)

“Basically, I emailed Mickey [Drexler] and I told him the truth — which is that I had just bought a navy blue tuxedo and two cashmere sweaters from J. Crew’s Ludlow shop and that I was a huge fan [of the brand],” said James Hirschfeld, the ceo and founder of Paperless Post. Six months later, the collection — which is J. Crew’s first-ever foray into stationery — was complete. “They brought this language and this voice to the cards that was a great surprise and a lot of fun,” Hirschfeld said.

The collection, which includes both digital and paper versions and starts at $.25, is available at Paperlesspost.com.