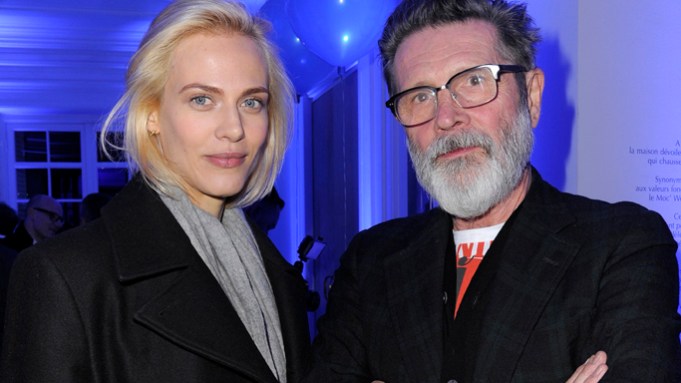 BLUE IS THE WARMEST COLOR: Aymeline Valade, Charlie Casely-Hayford, Chantal Thomass and Mathieu Ganio, a Paris Opéra Ballet étoile, were among the more than 600 guests who attended the cocktail and party hosted by J.M. Weston at its headquarters in the City of Light on Thursday.

The event was to celebrate the unveiling of the French luxury cobbler’s Le Moc’ Weston — a supple version of its 180 loafer that was designed for bare feet and introduced last year. The new iteration comes in International Klein Blue, as an homage to Yves Klein, plus eight other new colors. For the first time, models for women are included, as well.

“I was always impressed by Yves Klein’s blue monochrome painting. His blue is perfect. It is an ultramarine blue, worked in a subtle way. There is an intensity and a depth to it, that makes you travel. It brings a sense of dream and well-being,” the house’s director Michel Perry told WWD.

Casely-Hayford — who collaborated with Perry on a J.M. Weston capsule collection in 2014 — was in town to present his fall collection in the London showroom in Paris’ Marais district.

“Men’s wear is changing. Customers have more freedom when it comes to style. We have a card to play,” said J.M. Weston’s president Thierry Oriez.

“We are growing business in Japan and China. We have a store in New York. The next step is to have a better presence there as well as the West Coast. Ideally, we should have four or five stores stateside,” Oriez added.

The Klein Blue Moc’ will be a limited edition, with 1,500 pairs being sold for men and women starting in March.