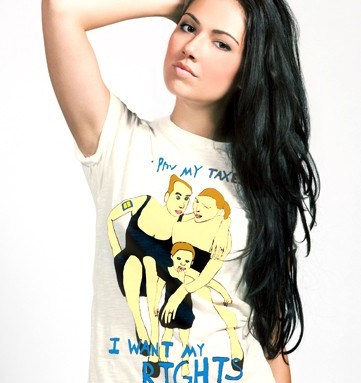 JACOBS BACKS HRC: Marc Jacobs is lending his influence in the fight for marriage equality. In collaboration with the Human Rights Campaign, he has designed a limited edition T-shirt featuring the image of a lesbian couple with their child and the words, “I pay my taxes, I want my RIGHTS!” on the front, and “Marc Jacobs Proudly Supports HRC” on the back.

HRC is the nation’s largest lesbian, gay, bisexual and transgender civil rights organization. Because of the federal Defense of Marriage Act, legally married same-sex couples are excluded from more than 1,100 federal rights and benefits of marriage — many of them related to taxes.

FOREVER NANCY: Nancy Reagan seems to be the perennial honorary guest at The Colleagues Annual Spring Luncheon, held Tuesday at the Beverly Wilshire, but this year the former first lady received a special award of recognition for her 49 years of service from her friend Oscar de la Renta. “It’s such an honor for me to say I’ve been friends with Nancy for so long,” said de la Renta. “This award may be small, but it’s full of love.” Reagan, wearing a white de la Renta suit, accepted the award from her seat at the table, saying, “I’m very appreciative and very happy to be here.”

Other de la Renta lovers at the lunch included Betsy Bloomingdale, in a red suit; Barbara Davis in white; Maria Bell in an ikat print number, and Kathy Hilton in pale blue. After a fall runway presentation, de la Renta hosted a trunk show at his Melrose Place boutique along with Boaz Mazor and Eliza Reed Bolen.

BETSEY’S WILD DERBY: Betsey Johnson will be doing her share for breast cancer awareness at the 107th Kentucky Derby by designing three unique hats worthy of the Mad Hatter. Johnson, a breast cancer survivor, will unveil the Kentucky Derby-inspired hats at the May 6 and 7 festivities. She said proceeds from two of the hats will benefit The National Breast Cancer Coalition and Gilda’s Club of Louisville. Johnson, who will be attending the Kentucky Derby for the first time, will also continue to support Chambord’s breast cancer efforts through the brand’s “Pink Your Drink” program. Chambord will sponsor a variety of Kentucky Derby activities, including the Kentucky Oaks Fashion Contest, which Johnson will judge, a brunch with the designer, as well as the one-of-a-kind hats.

“I wanted to do over-the-top hats, and when you think of it, the Kentucky Derby is one big fashion show,” said Johnson. “I’ve designed three hats — the Barbie Hat, which I adore and is so much fun; the Rose Hat, which also has whimsical looking spiders and bugs, and the Cleopatra-meets-Scarlett Hat, which has a pink wig. A hat maker in Brooklyn made me a huge pink straw hat and it’s encrusted allover with pink roses and fake diamonds.”

“Spain is an important — and successful — market for us,” Della Valle confirmed. “And, no, I am not afraid of the weak economy here. The Spanish people are strong and proud, much like us Italians.” With a two-level, 2,153-square-foot selling space, the Madrid location is double the size of the old unit.

STYLE CONSCIOUSNESS: To kick off its Earth Day celebration at its SoHo store, Bloomingdale’s is taking a chance on up and coming “eco” designer Carrie Parry, who has had stints at Jonathan Saunders, Marc Jacobs and Norma Kamali. “She’s a local designer, and we believe our SoHo store can be a launching pad for talented New Yorkers,” said Stephanie Solomon, Bloomingdale’s vice president of fashion direction. Parry will hold a trunk show Thursday through Sunday, with a spring capsule collection exclusive to Bloomingdale’s, as kind of a prelude to the launch of her first full collection in the fall.

Parry’s line emphasizes sustainability in multiple ways. It’s sourced from recycled, organic and carbon neutral textiles from domestic suppliers and artisans around the world, and is manufactured in New York City. Also, it’s built on the concept of interchangeable and detachable pieces and designed for versatility — day to night, season to season — so there’s more wear out of the garments and less need to buy additional ones.