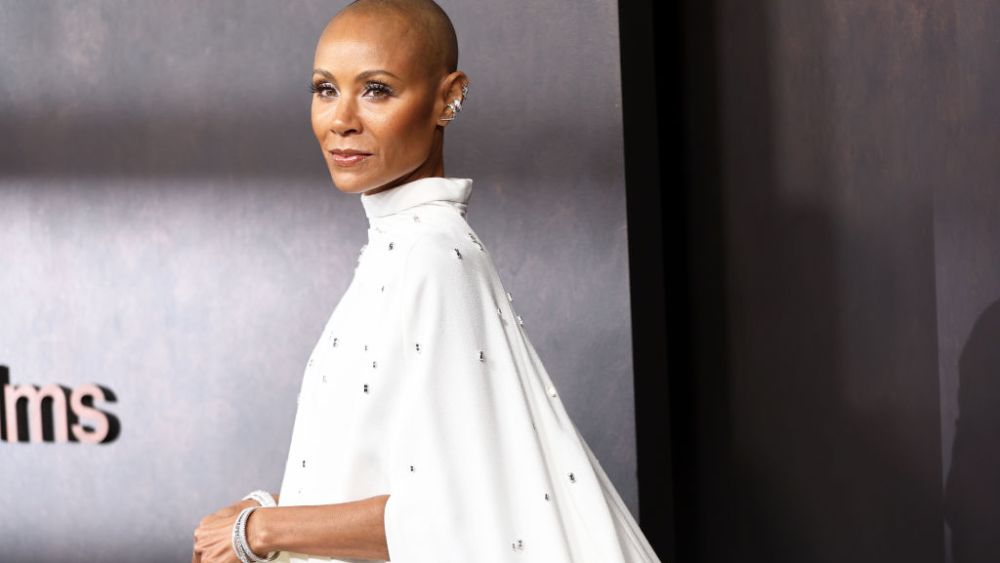 Jada Pinkett Smith made an ethereal arrival to the “Emancipation” movie premiere in Los Angeles on Wednesday. For the occasion, the actress looked to French designer Stéphane Rolland’s fall 2022 haute couture collection, wearing the long asymmetrical gown embroidered with crystals.

The silhouette featured a mock-neck, poncho-like top with sparkling embellishments. The rest of the gown consisted of a voluminous skirt that led into an ultra-long ruffled train.

She coordinated the look with a pair of Giuseppe Zanotti’s silver strappy Harmony sandals. Her accessories included silver bangles, a silver bar ring and an Allora ear pin by Kat Kim.

She attended the movie premiere alongside her husband, Will Smith, who wore a burgundy suit. Also in attendance at the star-studded movie premiere was the rest of the Smith family, including their children, Jaden and Willow. Smith’s eldest son Trey, from a previous marriage, joined his siblings on the red carpet.

The Smith family continues to make ventures into the media and fashion industry. In November, rapper and designer Jaden Smith spoke to WWD about his inclusionary fashion line MSFTS. In September, songstress Willow Smith partnered with Mugler to donate $50,000 to her mother’s alma mater, Baltimore School for the Arts. Willow was named as the face of Mugler’s women’s scent Alien Goddess in 2021.

Premiering on Apple TV+ on Dec. 9, “Emancipation” follows the story of an enslaved man who escapes through the treacherous swamps of Louisiana to freedom. Based on the historical accounts of “Whipped Peter,” the movie stars Will Smith, Ben Foster and Charmaine Bingwa.