On Wednesday, Jade Jagger was in Paris presenting the flacon she reworked for Guerlain’s iconic Shalimar fragrance. 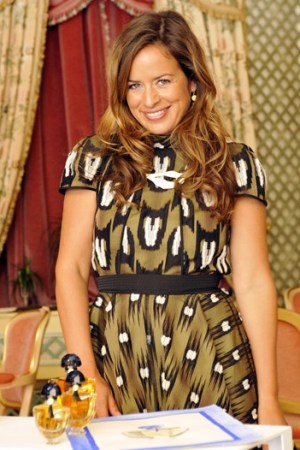 MESSAGE IN A BOTTLE: Jade Jagger is no stranger to Guerlain, thanks to her mother, Bianca Jagger, a big fan. “I grew up with Guerlain’s beautiful bottles in her bathroom,” reminisced the jewelry designer Wednesday. Jagger was in Paris presenting the flacon she reworked for Guerlain’s iconic Shalimar fragrance. “I wanted to get close to its original shape,” she said, adding the design also was given somewhat of a facelift, including cleaner lines. The updated Shalimar bottles will hit shelves in October. There also will be a limited edition iteration Jagger created for the holidays.

This story first appeared in the July 8, 2010 issue of WWD. Subscribe Today.

WELL HEELED: Mélanie Laurent may have just wrapped up a film called “Beginners” with Ewan McGregor, but the French actress is no novice when it comes to fancy footwear. “It’s a cocktail — of course I’m wearing [Zanotti],” exclaimed Laurent, her feet glittering in her silver pumps at the Giuseppe Zanotti soiree Tuesday night at the Ritz.

“Shoes are my second love. The first is my passion for jewels,” said Giuseppe Zanotti, who is opening a store in Beverly Hills next month.

Actress Julie Depardieu was gearing up for a theater production at the Theatre de la Madeleine in September. “It’s called ‘Nono,’ by Sacha Guitry,” she said.

Anja Rubik, the face of Giuseppe Zanotti and Fendi perfume, said her three weeks in Paris was coming to an end. “I am so looking forward to going back to New York. I packed for three days and I have been here for three weeks,” she laughed.

GONE FOR NOW: Abercrombie & Fitch is beating back the bedbugs. The A&F store in Manhattan’s South Street Seaport was set to reopen today after being cleaned up and closed since Friday. A&F’s Hollister flagship in SoHo reopened Saturday after being closed since June 30. The company also checked its distribution centers and said they are not affected, leaving the origin of the bedbugs still in question.

HOUSE ADS: Spanish fast-fashion chain Mango’s self-professed love of architecture led it to the 1962 Garcia House on Mulholland Drive in Los Angeles for its fall ad campaign. There, inside the curvaceous glass John Lautner-designed house, which was famously blown up in “Lethal Weapon 2,” Mario Sorrenti shot the curvaceous Scarlett Johansson, who wore pieces from the Seventies-inspired collection, such as a heathered brown sweater with a toggle closure, a brown cardigan, jeggings and suede peep-toe sandals.

SCOOP SETTLES: Scoop NYC, which operates 11 stores throughout the U.S., has reached a confidential settlement with the Retail, Wholesale and Department Store Union and Retail Action Project. The retailer allegedly required 17 stock and security workers to work 60 or more hours a week for more than six years without paying the legal overtime rate. According to RWDSU and RAP, after they were notified about the back wages, a campaign was launched, and the company fired many workers. Some workers contend they were discriminated against on the basis of their national origin because Scoop NYC refused to accept their legal work authorization papers. Two complaints were filed against Scoop NYC by RAP and the law firm of Cary Kane LLP, one seeking paid overtime and the second was filed with the U.S. Department of Justice alleging discrimination based on national origin. The confidential settlement with the company is said to cover both cases.

POOR COUTURE: Couture doesn’t only have to be about highfalutin fabrics. That was Franck Sorbier’s thinking, in any case. The madcap couturier mixed a couple of pauper-chic looks into his eclectic fall collection that was presented at Sotheby’s Paris headquarters on Wednesday. These included a bustier honed from flattened candy and potato chip packets and a paper gown with a papier-mâché-molded bustier edged with clothespins.