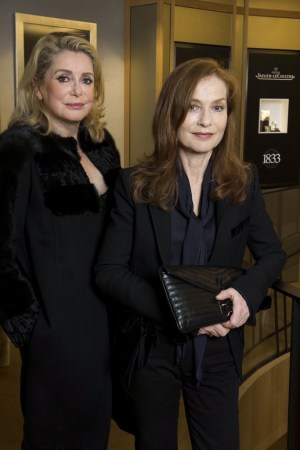 AS TIME GOES BY: Swiss luxury watch brand Jaeger-LeCoultre celebrated its 180th anniversary with a party on Thursday night at its Place Vendôme flagship. Guests including Catherine Deneuve, Isabelle Huppert, Barbara Bui and Hervé Van Der Straeten joined Daniel Riedo, who took over as chief executive officer of the brand on July 1, at an event that featured a performance by French singer Margaux Avril.

“G.I. Joe: Retaliation” star Elodie Yung said her next project is a British independent film, “Still,” in which she stars opposite Aidan Gillen. “I play the girlfriend of the title character, who is a photographer mourning the loss of his son,” she said.

Simon Buret said he was working on a third studio album with his band, Aaron. “It’s going to be more radical,” the French singer said, explaining that he was attracted to darker subject matter. “It might still turn into something very luminous, but it will be a burning kind of light. I don’t want anything tender.”

Andy Gillet, who leaned into a magnifying glass to check out the diamond setting on a Reverso watch, said he had completed filming on Joseph Morder’s “La Duchesse de Varsovie” (“The Duchess of Warsaw” in English) opposite Alexandra Stewart.

“The visual style of the film is really daring: We play against painted backdrops, and the other characters are made of cardboard. It sounds unusual, but it works,” he said.