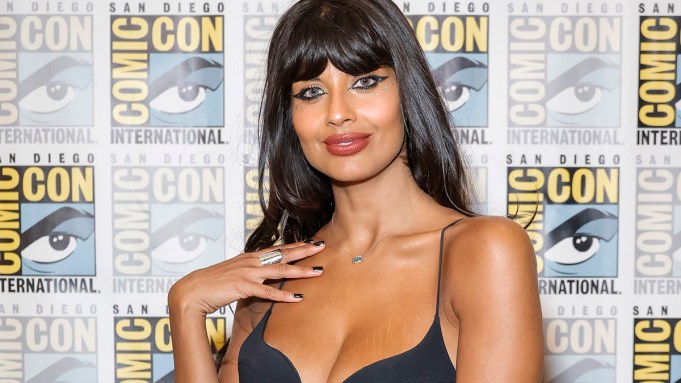 Jameela Jamil attended Comic-Con International in San Diego on Saturday, channeling the dark energy required for her upcoming role as a Marvel super-villain.

For the “She-Hulk: Attorney at Law” panel, Jamil wore a David Koma black minidress with plexiglass crocodile detailing at the hem. The star paired the spaghetti strap dress with black stockings and black heeled platform sandals.

“Can I get a little commotion for the dress? Love a villain dress with a disco reptile crawling up me,” Jamil wrote on Instagram.

With her nails and toes painted black, Jamil accessorized the look with silver statement rings and a Diane Kordas necklace with a blue diamond Pop Art charm reading “Bam!” The actress wore her hair in gently curled locks down her back with her bangs slightly parted in the front. For makeup, Jamil wore a statement black winged eyeliner decorated with green glitter and crystals. The 36-year-old actress wore a crimson lip to complete the look.

Jamil was at the convention promoting her soon-to-be-released Marvel television series “She-Hulk: Attorney at Law.” The half-hour comedy TV series centers around lawyer Jennifer Walters, who is the cousin of Bruce Banner, The Hulk. After suffering a life-threatening injury, Walters needs a blood transfusion from Banner, which causes her to inherit his hulking powers. Though she excels at being an emerald “She-Hulk,” things get a bit complicated in her professional life when she joins a law firm specializing in cases involving super-humans. Jamil is set to play Titania, a super-villain and She-Hulk’s arch nemesis, in the television show. The first episode of “She-Hulk” will premiere on Disney+ on Aug. 17.

Comic-Con International is an annual convention famed for highlighting soon-to-be-released blockbuster movies, television and more notable forms of action, sci-fi and horror entertainment. The convention spans four days with this year’s event highlighting upcoming projects from Netflix, Marvel, Disney and DC Comics including “Black Panther: Wakanda Forever,” “Shazam: Fury of the Gods” and “Lord of the Rings: Rings of Power.”