The cashmere company is creating N.Peal 007 to commemorate 50 years of the James Bond franchise.

From his Tom Ford suits to his Aston Martin cars, James Bond is legendary for his classic, sartorial style. He’s also comfortable in a cashmere sweater, which is where N.Peal comes in.

In “Skyfall,” the 2012 installation of the series, the stylist for the film turned to N.Peal cashmere when she was searching for a lightweight blue sweater that would match the eye color of its star, Daniel Craig. The relationship continued with 2015’s “Spectre” where N.Peal’s cashmere knits were used in that film as well.

The next film, “No Time to Die,” is due out in April, and Adam Holdsworth, the owner and managing director of the U.K.-based N.Peal, is closing to finalizing a deal to become one of the official partners for the film. But while the ink may not be dry on the contract yet, that hasn’t stopped N.Peal from creating N.Peal 007, a cashmere collection that celebrates 50 years of Bond. It will be offered for sale beginning on Oct. 18 on the N.Peal site, at its five stores in London and one in New York, as well as on Farfetch.

The collection features 13 pieces covering the six actors who have played Bond over the past half-century. This includes not only styles inspired by the films but also the same pieces worn by Craig in “Skyfall” and “Spectre.” The collection includes V-neck, mock turtleneck, rollneck, crewneck, fisherman’s and ribbed polo neck sweaters, a five-button polo shirt, knit jacket and waistcoat, zip-up bomber, a T-shirt, tie, gloves and hat. 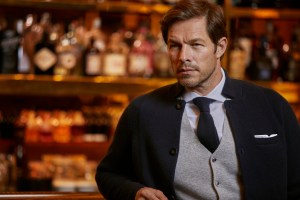 A look from the N.Peal 007 collection.

N.Peal is also hoping to add a Bond girl collection in the future that will include sweaters and T-shirts.

To promote the launch of the collection, Holdsworth created his own version of a Bond film starring British model and actor Paul Sculfor, who was at one time linked to Jennifer Aniston and Cameron Diaz. His journey starts in the Bar Américain at Zedel’s in Piccadilly in London and continues to the Highlands of Scotland. “The film nearly killed me,” Holdsworth said with a laugh describing the logistics of the shoot and its far-flung locations.

“Bond is a huge global brand and to be able to attach to it even in a small way was amazing,” Holdsworth said. “We feel like we’re part of something really big.”

N.Peal dates to 1936 when Nat Peal opened a men’s haberdashery in London’s Burlington Arcade. It became known for its cashmere, which today is its only product offering. Holdsworth, whose family was in the cashmere business, purchased the brand out of the U.K. version of bankruptcy in 2007. The brand buys its cashmere and manufactures its collection in Mongolia.