James Harden Suits Up at Bloomingdale’s

The NBA All-Star brings swag to his Bloomingdale's/GQ suiting campaign. 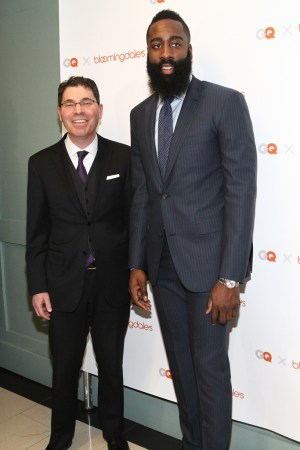 Consider NBA All-Star James Harden a showboater, off-the-court that is. He’s got swagger, that distinctive full beard, and lots of style. He does bow ties and blazers paired with sweatpants, tailored of course.

On Thursday he appeared at Bloomingdale’s wearing an understated blue pinstripe Freeman suit and greeting scores of fans who received complimentary haircuts, shaves, cocktails and style tips from GQ experts. The appearance gave a lift to the Bloomingdale’s/GQ suiting campaign with Harden and his off-the-court looks the centerpiece. “They’ve given me a couple of great suits,” said the six-foot, five-inch Houston Rocket guard.

The event also flagged Bloomingdale’s recently-opened NBA shop which sells vintage jerseys, T-shirts, sweatshirts, caps, socks and jackets. “James is a lovely guy. He’s into fashion, and he’s having a great season,” said Bloomingdale’s chairman and chief executive officer Tony Spring. “He reminds me of how short I am. Obviously, the beard is a big part of his style.”

As Spring observed, NBA players have become style icons, so when Harden and the players hop off the team bus and take their long strides to the locker room, it’s a red-carpet moment, the NBA way. Asked what he’ll be wearing for his entrance into Madison Square Garden for Sunday’s All-Star Game, Harden replied, “Now you know I can’t tell you that. I like to just pop out and surprise people.”