The designer has opened his 43rd store at Dallas' Highland Park Village and is adding accessories to his casual sportswear and furniture empire. 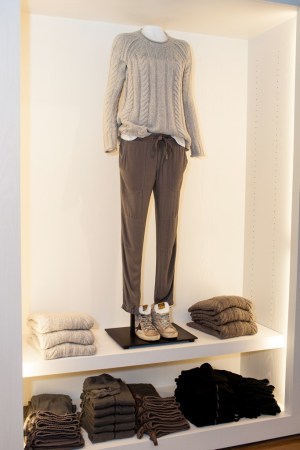 EXPANDING WORLD: James Perse is creating a world of accessories to accompany his casual sportswear and furniture empire.

“We’re developing bags that will be introduced in 12 months in our stores,” the designer said at the debut of his 43rd clothing store at Highland Park Village shopping center in Dallas. “We’re also doing watches, wallets, jewelry. We do everything ourselves — that’s why 20 years later I’m starting accessories.”

Their launch will coincide with the unveiling of a new look in the Madison Avenue store, which is expected to close for renovation next year. “That will probably become our flagship,” Perse noted.

Each store has a slightly different look, and the bright 1,600-square-foot Dallas unit features a French oak herringbone floor, white walls and an airy cupola.

“We do best when we’re in a neighborhood environment that’s a local shopping destination and has history and is going through reinvention,” Perse noted. “That’s our home away from home.”