Fridays For Future held its Fire Drill Friday at Capitol Hill, resulting in the planned arrest of actress Jane Fonda.

Fridays for Future, the organization started by youth climate activist Greta Thunberg, protested at the Capitol Building on Friday in Washington, D.C., resulting in the arrest of actress, fitness advocate and activist Jane Fonda.

“We feel overwhelmed and we don’t know what to do. We make personal choices like driving an electric car or going vegan and recycling and we think that that’s enough. And it’s great and we need to keep doing it. But this is a collective crisis that needs collective action now,” said the actress in a video shared by the organization on social media.

Fonda moved to Washington for four months “to focus on climate change,” to protest alongside the organization. The protests began Friday morning, and Fonda’s arrest along with others is an intentional demonstration. 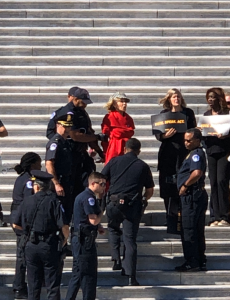 The organization recently received the award for policy leadership at the United Nations Champions of the Earth gala held in New York in September.

At the gala, the young activist attendees, many of whom sported their own business cards and organizational involvement, professed a distaste for the pedestal placement of their teen counterpart: Thunberg.

“We don’t need another celebrity,” Azalea Danes, the 17-year-old activist who was invited by Patagonia to the dinner and gala, told WWD. “We need action.” Danes is a member of the Fridays for Future initiative, as well as the U.S. and local youth chapter of Extinction Rebellion. Her parents are Robert Alexander Danes and Rachel Hall Danes of the Bergdorf Goodman-carried luxury women’s wear line The Danes.

When asked about Friday’s incident, Kathleen Rogers, president of the world’s largest environmental movement Earth Day, also based in Washington, said she wasn’t aware it happened but had previously received numerous e-mail requests suggesting Fonda as a speaker at the mall on Earth Day at the organization’s upcoming 50th anniversary.

Celebrity activism doesn’t end with Fonda — Alec Baldwin, Leonardo DiCaprio and, from the fashion industry, Stella McCartney, Vivienne Westwood and Mara Hoffman have taken to the front lines to protest.

The fashion industry is no longer a bystander to climate inaction, and the Global Fashion Agenda’s 2019 update to its Pulse of the Fashion Industry report produced with the Boston Consulting Group warned that if the fashion industry does not implement changes at a faster rate, it will not be able to achieve the UN’s sustainable development goals or that of the Paris Agreement. 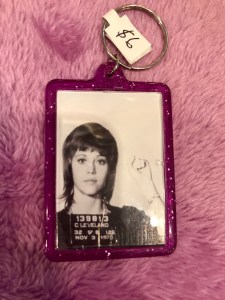 As Climate Change Takes Center Stage, Brands Step Up Efforts to Fight It