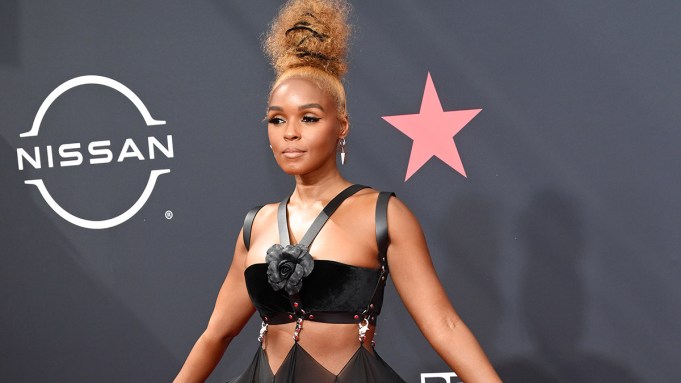 Ever one for taking style risks, Janelle Monáe leaned on edgy style inspiration when choosing an outfit for the 2022 BET Awards on Sunday in Los Angeles, attending the award show in a sheer black skirt and a leather harness top. And the 36-year-old singer-actor used the radical fashion choice as a response to the current climate around women’s rights to their own bodies.

Styled by Alexandra Mandelkorn, Monáe — who recently came out as nonbinary, clarifying that they use she/her and they/them pronouns — wore a black Roberto Cavalli gown featuring a flowing sheer skirt held up by a black leather harness. The harness, which featured silver hardware and a large black rose at the center, was layered over a velvet bandeau-like top. Monáe paired the look with black open-toed platform heels.

The star wore their blond locks in a high curly bun, which was wrapped with black cord, with a singular thin braided piece hanging at the nape of their neck. They wore silver spike drop earrings, a collection of silver and black bangles, and chunky silver rings. Monáe also painted their nails a metallic silver color.

According to Monáe’s stylist, the edgy look was partially a sartorial response to the recent Supreme Court’s 6-3 decision to overturn Roe v. Wade, effectively eliminating the constitutional right to an abortion after almost 50 years. Mandelkorn posted pictures of the look to social media, captioning the post, “It’s giving, ‘My body, my choice.'”

While presenting an award during the show, Monáe also referenced the current climate around the rights of those who were assigned female at birth, advocating for bodily autonomy and healthcare access.

“I’d like to give a special, special shoutout to Black women, to Black queer artists, to Black nonbinary artists. [We are] making art on our own terms, owning our truths and expressing ourselves freely and unapologetically in a world that tries to control and police our bodies — my body — and our decisions — my decisions,” Monáe said, finishing the statement with an expletive directed at the Supreme Court during the live telecast.