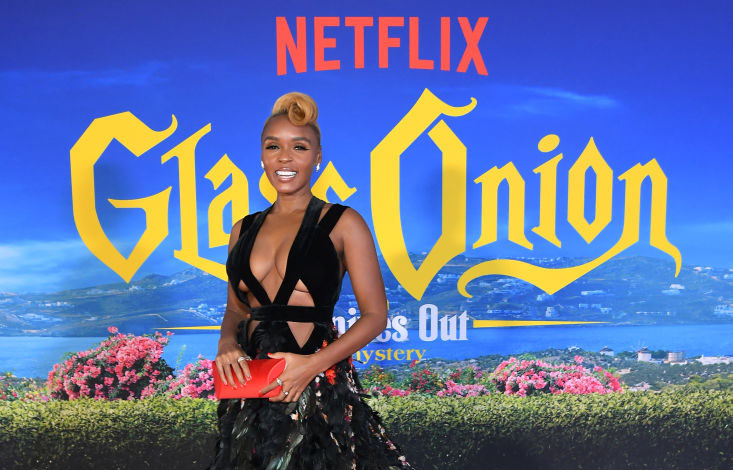 Janelle Monáe arrived at the “Glass Onion: A Knives Out Mystery” premiere on Nov. 14 in Los Angeles, California, wearing a dramatic black and red gown by Elie Saab.

The dress incorporated a cutout bodice and a black and red skirt made from feathers.

Monáe’s Elie Saab gown was from the brand’s 2022 couture collection, which was described as the designer’s ode to the crepuscule, a game of shadows drawn in contrasts between geometric lines and rounded, sun-like forms.

Monáe accessorized with jewelry from Al Zain, including several rings and a pair of hoop earrings. She also carried a cylindrical red clutch by Rodo.

Stylist Alexandra Mandelkorn created her look for the ongoing promotional tour of the “Knives Out” sequel, dressing the star in brands such as Iris Van Herpen, Cult Gaia and Christian Siriano. Mandelkorn also works with Rachel Brosnahan, Christina Ricci and Jurnee Smollett.

For makeup, Monáe went for a minimalist look, featuring a nude lip, mascara and bronze eye shadow. She had her hair, currently dyed blond, done in a pompadour style with a statement curl.

Just last week, Monáe attended the 2022 CFDA Fashion Awards, where she made another red carpet statement in a voluminous Thom Browne dress carrying the brand’s Hector dog bag. The moment came just days after she wore a two-tone dress from Gucci to the LACMA Art+Film Gala.

“Glass Onion: A Knives Out Mystery” debuts for streaming on Netflix on Nov. 23. In addition to Monáe, the film also stars Daniel Craig, Madelyn Cline, Kate Hudson, Edward Norton, Ethan Hawke and Kathryn Hahn. The movie is a sequel to the 2019 film “Knives Out.”