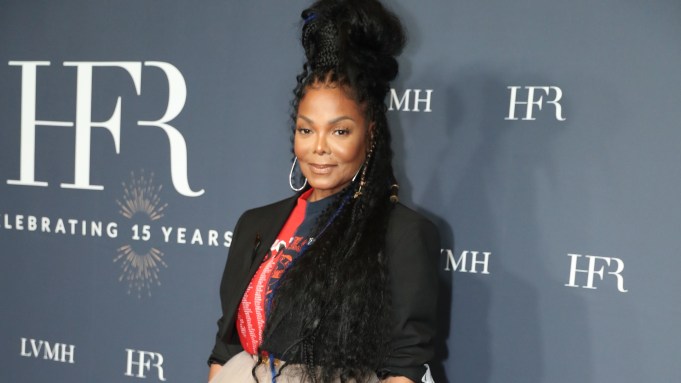 Janet Jackson is living up to her new status as an icon.

On Tuesday, the legendary singer attended the after party to Harlem Fashion Row’s 15th Anniversary Fashion Show & Style Awards wearing a black-and-red top under a cropped blazer paired with a tulle cream skirt by Off-White. She styled her hair half-up, half-down and kept her makeup simple, accessorizing her look with statement jewelry.

She was styled by Wouri Vice, who also works with H.E.R. and Andra Day.

Jackson was honored at the after party at Jazz at Lincoln Center, which was in partnership with LVMH in North America, with the Icon of the Year award for her immense contribution to the music industry.

With this year’s theme, “Future’s Past,” the event at a private location showcased fashion’s future and aims to support further progress for diversity, equality and inclusion in the fashion world.

In addition, HFR introduced an award presented by LVMH in honor of the late Virgil Abloh. Multihyphenate Issa Rae was the recipient of the inaugural award, which was given by the designer’s wife, Shannon Abloh. The award, recognize individuals who embody Virgil Abloh’s spirit, brilliance and vision through contributions to culture, community and innovation, according to HFR. Abloh, the former artistic director of Louis Vuitton’s menswear collection and founder of Off-White, died Nov. 21, 2021.