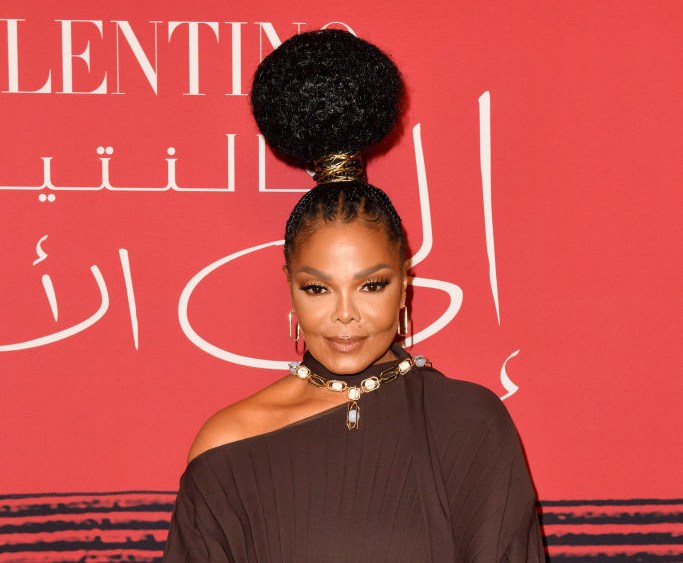 In honor of the occasion, Jackson silhouette was long-sleeve and pleated with an expansive train and shoes from Valentino’s spring 2023 Unboxing collection. Creative director Pierpaolo Piccioli designed it with stretchy underlayers, elasticated waists and generous volume.

She accessorized with oversize hoop earrings, a gold and white stone necklace and rings. She also carried a gold evening wristlet bag.

Jackson went for an evening-ready makeup look, including a nude lip, highlighter to contour her cheeks, bold wingtip eyeliner and earth-tone eye shadow.

She made a statement with her hair, which she had done in brands in the front, but tied in the back to create an afro-style ponytail tied at the base with a gold wire scrunchie.

Jackson had a busy Fashion Month from September to October. The singer attended runway shows for Christian Siriano, Thom Browne and Alexander McQueen. Jackson is also in the Middle East attending events for Fashion Trust Arabia.

Outside of participating in the fashion event circuit, earlier this month, Jackson also debuted the 25th-anniversary deluxe edition of her 1997 album, “The Velvet Rope.” It features 10 bonus tracks available on streaming services for the first time and sought-after B-sides and remixes.

Forever Valentino is an exhibition paying homage to Valentino’s namesake founder Valentino Garavani. The exhibition is open at the M7, the design and innovation hub in Msheireb Downtown Doha. The exhibit was created under the direction of Piccioli. Notable attendees at the exhibition opening included Naomi Campbell, Karolina Kurkova and Halima Aden.