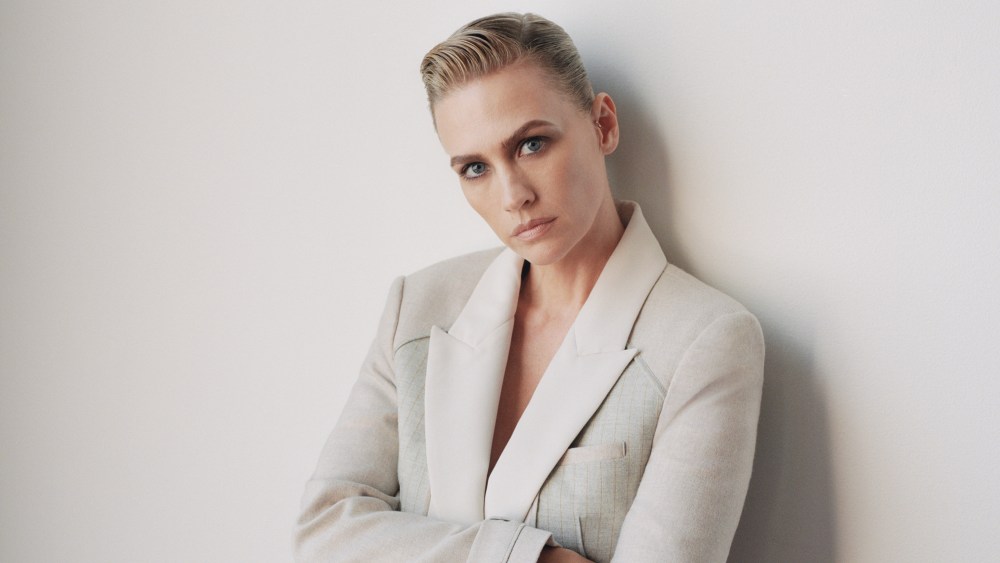 Jonathan Simkhai looked to one of his close friends for his fall 2022 campaign: January Jones.

The fashion designer tapped the actress to star in his label’s new campaign. After moving his label to Los Angeles, Simkhai wanted to look to the Hollywood community to showcase his fall collection.

“My brand always finds tensions in dichotomies such as masculine and feminine,” Simkhai said. “We were excited about creating a dichotomy here between a big-screen actress and a fashion campaign, blending in different characters along the way. My goal in designing and creating always aims to elevate the everyday and celebrate the unapologetic spirit — to me, January perfectly embodies this.”

Jones is seen in the campaign modeling pieces from Simkhai’s fall collection including a pink fringe set, a red leather dress shirt with a matching skirt and a white embellished blazer, among other styles.

“This collection was a great fit for me personally because a lot of the looks were classic pieces that will always have space in your wardrobe and then also many looks that had a lot of lean toward the whimsical past decades that I love,” Jones said. “That dynamic allowed us to take inspiration from current and past decades in the campaign as a whole. Whether it be from the ‘90s, the ‘60s or ‘70s or now, and yet still feel very modern.”

Simkhai wanted to pay homage to figures through the campaign and bring in a ‘60s and ‘80s vibe through the styling and hair and makeup. He worked with stylist Alex Harrington to help create the campaign.

“With January being an actress, we leaned into character building and thinking about what characters she could embody in the photographs,” he said. “Working with stylist Alex Harrington, we landed on a fun mix of personalities including an ingenue Michelle Pfeiffer in ‘Scarface’ blended with a Twiggy inspired Warhol star, and then a subtle Teddy Boy hairstyle thrown in.”