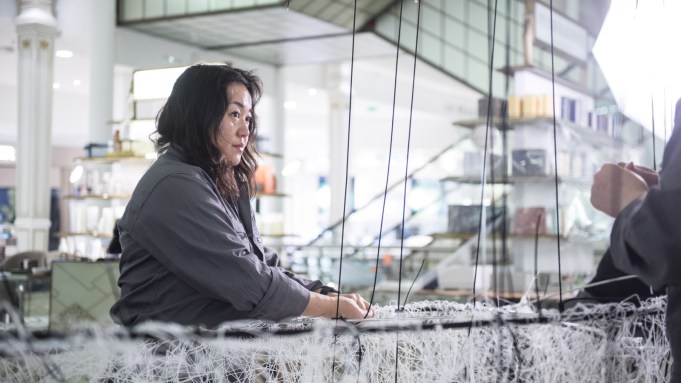 SPINNING IN SPACE: Paris department store Le Bon Marché is strengthening its links with the art world with a new in-store exhibition by Japanese artist Chiharu Shiota, known for her haunting weblike installations.

Shiota is spinning 300,000 yards of white thread for the show, scheduled to run from Jan. 14 to Feb. 18. Le Bon Marché’s 10 windows will feature webs interspersed with ancient maps, while 150 ghostlike ships will hang in the atrium. Meanwhile, the ground-floor exhibition space will be home to a massive wave-shaped installation.

She has titled the show “Where Are We Going?” — a reflection on travel and the modern obsession with information. In an interview at the store, where Shiota and nine assistants have been working nights to finalize the project, she said creating a work for a department store presented a new challenge.

“I usually show in museums. People don’t come here to look at the art, but to shop. It’s a little different, so for me the big challenge is: how do I draw these people who come to shop into the world of art?” the artist, who represented Japan at the 56th Venice Biennale in 2015, said through an interpreter.

The project marks the first time Shiota is using white thread instead of black or red — a nod to Le Bon Marché’s tradition of promoting household linens in January, earning it the name “the month of white.” The boats, however, are a recurrent theme in her work and hark back to childhood memories of traveling with her parents.

“For me, boats carry not only people, they also carry time and the links between people,” she said. “When I was little, we spent our vacations in Kochi [on the Japanese island of Shikoku.] We would take the ferry overnight, and for me, when I woke up the next morning, it felt like being in a foreign country.”

Shiotu has 22 shows scheduled in the next year, including the sets for a Richard Wagner opera to be staged in Germany, where she is based. “Everyone carries a void inside of them. Shopping is perhaps a way to fill that void. For me, creating a work of art is also a way of filling a void,” she said.