TURTLE TALE: Jared Leto is enjoying an Italian holiday, and trying his best to speak to the locals — both man and beast. According to a Snapchat diary that he’s been keeping, the actor has been spending some downtime with his good friend, Gucci’s creative director Alessandro Michele.

Highlights so far include his encounter with a turtle. Snapchat footage shows Leto, wearing a pair of silk printed Gucci trousers and a pair of the brand’s loafers, walking close to the animal and saying, “Sbrigati!” — Italian for “Come on!”

There are also pictures of him mimicking an Italian accent, with Michele laughing at his attempts. 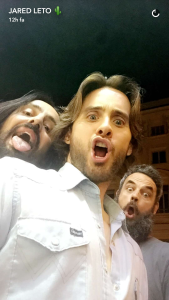 The actor is no stranger to the social media platform. Back in December, Gucci appointed Leto as the new face of its men’s fragrance Gucci Guilty breaking the news via its official Snapchat account, where Leto appeared in a short video along with Michele.

Leto has since then taken over Gucci’s account for the following three days and then starred in the fragrance’s new campaign, which was shot in Venice, Italy, and directed by Michele.

Leto arrived in Italy last week for the Gucci men’s show The actor and musician is set to appear next year on the big screen as the Joker in the upcoming movie “Suicide Squad,” alongside fellow actors Will Smith and Margot Robbie.

He is famous for his quirky sense of humor. During shooting, he sent presents to fellow “Suicide Squad” cast members and gifted Robbie a live rat (what is it with Leto and lowly animals?) which was then adopted by Guillermo del Toro.