François Girbaud was among the party’s guests. 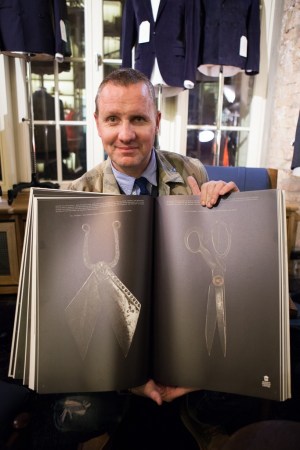 California’s PQ Swim Expands Into Loungewear and Lingerie, Collaborates With the Herbert Twins

A 6M Euro Handbag to Save the Oceans

FETING FIVE: François Girbaud traveled to Berlin exclusively to celebrate the launch of Jason Denham’s retrospective book. The party for “5” was held Tuesday at the 14 oz. store on Kurfüstendamm.

“Yesterday our company had a five-year anniversary, and the book was a great excuse for us to tell some stories about the two things that we love the most — people and product,” explained Denham.

The tome is limited to 1,000 sequentially numbered copies and comes with a wooden scissor bookmark. Weighing about 11 pounds, the oversized book is approximately 19-by-13-by-1.5 inches and comes is in English and in Japanese. (Japan is Denham’s number-two market.)

There’s a second connection to the number five, as well. Denham features a five-page homage to the five people who inspired him in the denim business: Adriano Goldschmied, François Girbaud, Renzo Rosso, Nigel Cabourn and Karl-Heinz Muller.

“I met Jason five years ago, and I immediately liked him. Jason is a great guy who does very good work, and I wanted to come here to give him the support,” said Girbaud.

The book will retail for 250 euros, or $334 at current exchange. Proceeds from the signed copies, which each are to go for 500 euros, or $668, will aid fisherman in Japan who were impacted by the tsunami.

“After the tsunami in Japan, we decided to sponsor fishermen’s boats to help them get back on their feet,” said Denham. “I visited Japan and saw the devastation. I was touched by the positive outlook they had, even though these people had lost everything.”