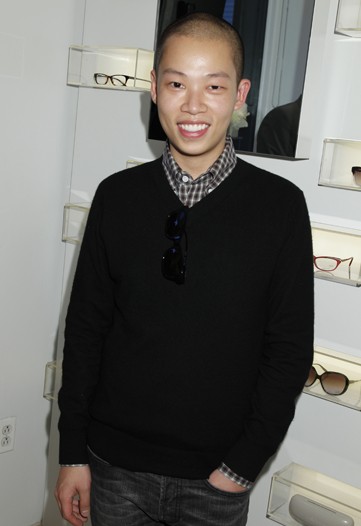 THE RENEGADES: Come September, most designers are Lincoln Center bound, but a few already are breaking away from the pack. Jason Wu and Nicole Miller are digging in stakes at the event space 82 Mercer Street to stage their shows. Miller has lined up a doubleheader for Sept. 10, which is also Fashion’s Night Out. Her show will get rolling at 5 p.m. and the designer’s Fashion’s Night Out event will start at 6:30 at her Greene Street boutique just around the corner. Miller previously showed at the tents at Bryant Park, but Wu generally shows off-site.

AKRIS IN DALLAS: Akris designer Albert Kriemler will be the beau of the Crystal Charity Ball luncheon at Neiman Marcus’ flagship in Dallas Sept. 10. The runway event draws an elite crowd that last year included Laura Bush. About 500 women will descend on the store for the annual rite to celebrate 11 of their own, deemed “best dressed” by the exclusive charity, which has only 100 members — with last names like Hunt and Perot. The visiting designer gets his due with more than a runway show of the fall collection. Most of the honorees — and some of the crowd — wear complete ensembles from his fall collection to the luncheon as well as to a private cocktail party the preceding evening. The luncheon typically nets more than $500,000 to support children’s causes.

BLACK SPARKLERS: Carla Bruni-Sarkozy doesn’t lend her name to New York events too often, but the little black dress and lots of crystals appear to be the trick to get her on board. The fashion plate and first lady of France will serve as the patron of a special auction of LBDs at Phillips de Pury & Co. in the Meatpacking District on Sept. 20, and is planning on attending the event. Swarovski Elements asked 22 designers to make one-of-a-kind, crystal-embroidered numbers as part of an initiative called “22 Ways to Say Black,” with creations by the likes of Sonia Rykiel, Vivienne Westwood, Giorgio Armani Privé, Givenchy by Riccardo Tisci and Lanvin by Alber Elbaz. The dresses will be previewed at Phillips de Pury Sept. 7 to 20, and 100 percent of the proceeds from the auction and sales of its catalogue will benefit the American Cancer Society and La Ligue Nationale Contre le Cancer.

GALLIANO ON FILM: While John Galliano is best known for the lavish runway spectacles he constructs, come late fall, the designer will be taking center stage himself. In November, London’s Wapping Project Bankside gallery will unveil a photographic exhibition called “Zanna & John Galliano.” The show will feature images of Galliano shot by Zanna, a London-based photographer who has collaborated closely with the designer in the past. The images, some of which were published in the December 2006 issue of French Vogue, which Galliano guest edited, show him in what the gallery describes as a series of “intimate, closely guarded scenes.” Many of the works are made up of overlapping images, shot on different types of cameras to give a handcrafted feel. One work, “Warzone House,” is a sepia-toned image of Galliano sitting slumped in an armchair plunked in the grounds of a stately home, with smoke mysteriously billowing from one corner. In another, “Chevalier John Galliano,” the designer sits in a luxurious dressing room clad in a top hat, a white shirt, socks and sock suspenders, smoking a cigarette. The exhibition will number between 30 and 40 images, which were shot by Zanna over a five-year period, and will run Nov. 4 to Dec. 12.

AHOY, JADEY: Jade Jagger is broadening her horizons as jewelry designer, thanks to a new project with Italian jeweler Morellato.

Inspired by the sea and the life of sailors, Jagger has created 13 silver pieces centered around anchor charms, ropelike chains, knots and helms that will be available in Morellato boutiques and select jewelers worldwide from mid-October. Prices range from $102 to $234.

LES CANADIENS: John Bartlett has designed a men’s capsule collection for Québécois department store chain La Maison Simons. The collection, priced for the contemporary market and labeled John Bartlett — Collection Signature Simons, will launch in all seven Simons locations late this month. It’s a range of modern classics — slim and dark — with some of Bartlett’s signature military details. A campaign featuring model Tony Ward will run in French-Canadian magazines as well as in Simons’ book and stores.

SPACING OUT: Come September, accessories brand Kipling and the London-based label Peter Pilotto will unveil their first collaboration, a collection of bags to be sold at pop-up stores across Europe. The concept is intergalactic travel, and the bags will boast vibrant, galaxy- and machinery-inspired prints. The collection of shoulder bags, shoppers, waist bags, backpacks and wallets will be available in-store and online from the third week of September. One of the pop-up shops will be at Selfridges in London. Prices will range from 18 pounds, or $29 at current exchange, for a small purse, to 137 pounds, or $218, for a large shoulder bag. There is already a second collaboration in the works for spring.