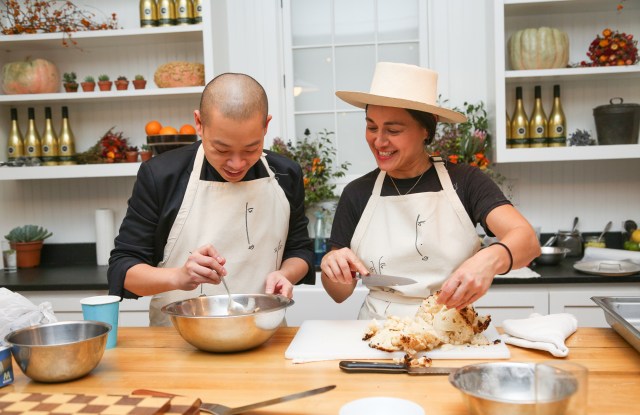 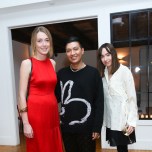 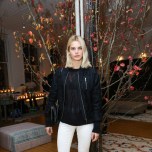 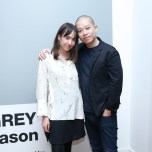 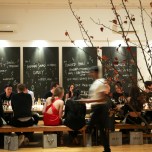 The event — held at an upper-level loft in Flatiron, a few blocks north of the anti-Donald Trump protests, which were well under way in Union Square — served as a celebration of Wu’s second collection for Grey. For resort 2017, Wu collaborated on a series of prints and embroideries with the New York-based artist Lara Hodulick, known for her Matisse-inspired face paintings on vintage textiles. It was her first-ever collaboration with a fashion designer. (Wu’s debut Grey collection featured a partnership with the artist Hunt Slonem — one which prominently featured bunnies.)

“[Jason] discovered me via Instagram,” said Hodulick, wearing a printed white blouse from the collection. “There was one photo of me [posed] next to Ellsworth Kelly flower drawings. We brought some of those elements together — the Ellsworth Kelly flowers and the faces that I paint — into prints and embroideries. I love the way [Jason] was able to create this print, which so closely mimics what I do in my work. It’s beyond my dreams to see my pieces in these knits, laces and different techniques that I would never have been able to source myself.”

A four-course meal prepared by chef Camille Becerra — who Wu also stumbled upon via Instagram — featured crudites, poached hen and petit fours decorated with edible renderings of Hodulick’s work. Wu admitted he loves using the social media platform as a tool for discovery. “[When I found Lara], I said, ‘More people need to know about this girl immediately,'” he said, noting that he often scouts for inspiration and collaborators on Instagram. “It’s not about how many followers someone has.”

During dinner, Wu was sandwiched between two beauties: Laura Harrier and Sonoya Mizuno, both up-and-coming actresses. Harrier will portray Liz Allan in “Spider-Man: Homecoming,” out next summer, and Mizuno, who is also a ballerina, appeared in last year’s sci-fi thriller, “Ex Machina.”

“The reason I started this dinner series is because I’m sick and tired of big fashion dinners where they serve you cold beef or pot pie, and I wanted to have dinners that are personal, that celebrate creative people — people who I admire — and that celebrate the art of collaboration,” Wu said. “It’s about being happy and not being stressed, and being in the company of great people that I look up to….These dinners have become really fun for me.”