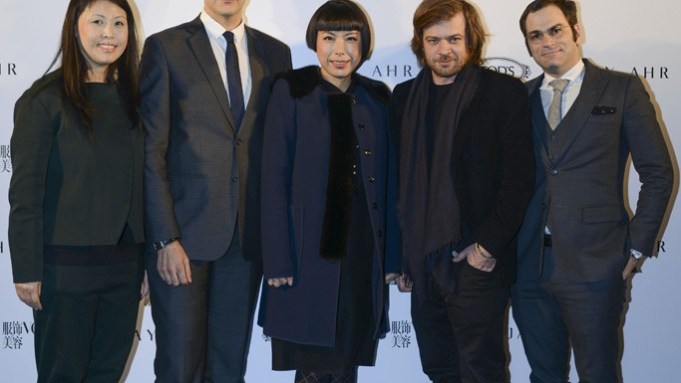 ON DISPLAY: Beijing, with its thick, frequent pollution and industrial architecture, might not seem a place that would inspire exceptionally creative art and fashion fusion.

But for French artist and Jay Ahr creative director Jonathan Riss, Beijing’s smog, shadows and unique angles are the source of ideas for a unique collection of China-made and China-inspired embroidery and embroidered fashion pieces. His work is on display Friday and Saturday at Beijing’s Ullens Contemporary Center for Art, one of the city’s best-known independent galleries in the 798 Art Zone complex. Vogue China and Tod’s, a partner in the project, hosted an opening party for the exhibition on Thursday evening.

Riss, who spends several months a year in China, said Beijing, a city where things can and do change overnight, led him to create the iconic series embroideries done in every medium from chains, beads and coral to the paneling used in making architecture models. The multifaceted exhibit took six years to create, partnering with a local fashion design college for colors and materials and a village in Hebei province known for its embroidery traditions.

“My way of working and thinking has been immensely influenced by China’s capacity to look to the future,” said Riss. “With such a deep-rooted culture I was mesmerized to see a culture so forward-thinking.”

The exhibit centers around six themes that form the subtext for color and texture: graffiti, rips and tears, shadows, ethnicity, chains and digital patterns. Each theme includes a signature piece of embroidery based on an animal design, with a selection of Riss’ women’s clothing designs and a Tod’s bag and pair of shoes in the same embroidery style. The one-of-a-kind pieces are for sale at the gallery and through Jay Ahr.

The result is a collection of art and fashion works that shape and shift in view depending on light and distance — which was part of Riss’ intention in creating the designs. For instance, one of the animal-themed art pieces is made from 7.5 miles worth of thin metal chains, cut into short sections and sewn to match the fur and markings of a wild animal. Some of the pieces, Riss said, took years to create while others took far less time.