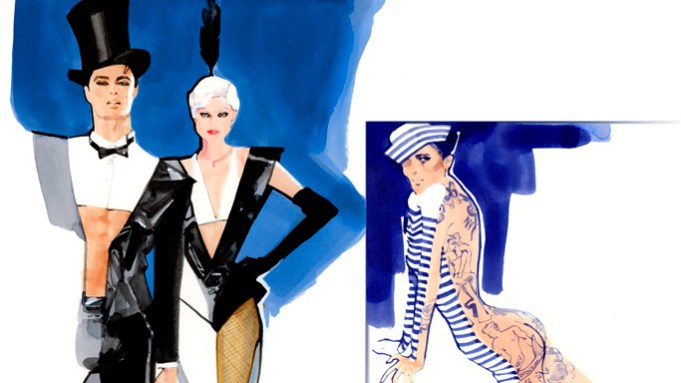 OPENING NIGHT: No stranger to the world of stage and screen, Jean Paul Gaultier had always dreamed of creating costumes for a cabaret show — a dream that just became reality for the first time. Gaultier has designed the costumes for a new revue to be staged at Berlin’s Friedrichstadt-Palast starting in the fall.

“I dreamed of working on a revue ever since I was a little boy and I saw the opening night of Les Folies Bergère on my grandmother’s TV,” said Gaultier. “I got in trouble at school the next day because I was sketching the girls in feathers and fishnets.

“It’s even more of a dream come true that the first revue I am designing the costumes for is in Berlin, the city that defined cabaret in the Twenties,” he continued.

Gaultier turned his hand to creating around 500 different costumes for The One Grand Show’s performers, who number more than 100. His designs are inspired by Berlin and cabaret but feature elements from his own repertoire like the sailor stripe and deconstructed silhouettes.

The One Grand Show, which is described by the theater as a portrayal of “the living diversity of the cultural metropolis,” officially debuts on Oct. 6, with previews starting Sept. 22. It is scheduled to run until mid-2018 at the 97-year-old Friedrichstadt-Palast, the largest theater stage in the world, in Berlin’s Mitte district.