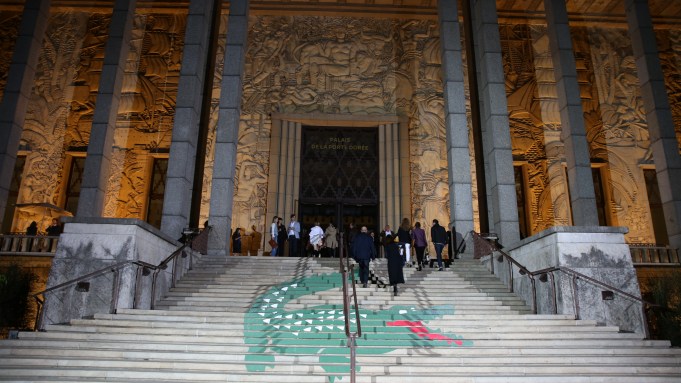 CROCODILE DANDY: A family of articulated crocodiles, with triangular hats, human torsos and origami tails, sprang to life on Wednesday evening in celebration of the launch of Jean-Paul Goude’s collaboration with Lacoste. As reported, he is the latest personality invited to redesign the brand’s storied crocodile logo for its annual “Holiday Collector” edition.

“It wasn’t a collaboration, it was a carte blanche,” said Lacoste creative director Felipe Oliveira Baptista, at the event in the great hall of the Palais de la Porte Dorée at the edge of the Bois de Vincennes in eastern Paris. He also had invited Goude to design the packaging and ad campaign for the festive collection due to hit stores in November.

“It’s full of energy, fantasy and sense of humor,” said Jérôme Dreyfuss, who called Goude “a genius.” The accessories designer worked with Goude for his spring 2016 campaign starring Aurélie Dupont and hopes to do his next campaign for spring 2017 with him, too. “When I work with him, I feel that I am working with a 17-year-old boy. It’s really impressive how much energy he has,” Dreyfuss continued.

“I am just a nervy little guy,” said the 77-year-old graphic artist.

Blanca Li, Yaz Bukey and Marie Beltrami were also among the guests.

Bukey is to present her spring collection on Sunday afternoon. “The inspiration is a gang of girls getting ready for a car race,” she explained. When asked whether she is a good driver herself, Bukey quipped: “No, but I am driven.”