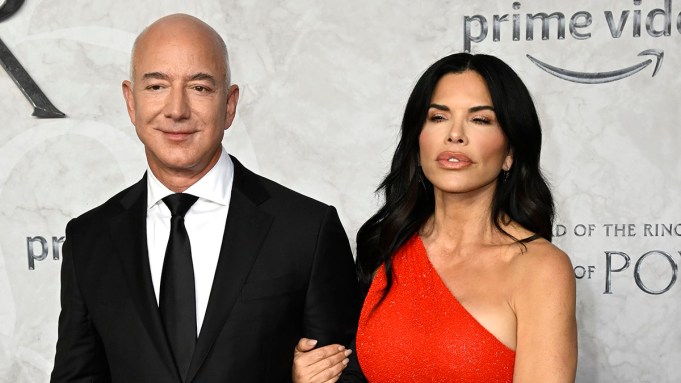 Lauren Sanchez made a vibrant statement at the world premiere of “The Lord of the Rings: The Rings of Power” in London. The adaptational series, based on the “Lord of the Rings” franchise by J.R.R. Tolkien, will release on Prime Video on Friday.

The Emmy-winning journalist arrived at the event alongside Amazon cofounder Jeff Bezos in a red one-shouldered dress with crystal embellishments and an asymmetric cut.

Her footwear and accessories also followed the sparkling theme as she wore a pair of silver strappy heels with rhinestones. Sanchez wore a three-tiered diamond bracelet, silver drop earrings with a pearl detail and an anklet with jeweled trimmings.

On Aug. 16, Sanchez also attended the Los Angeles premiere for the fantasy series. She wore a similar silhouette, choosing an off-the-shoulder Tom Ford gown with a side slit and asymmetric cut across its bodice.

Her look was styled by Micah Schifman, who has worked with Jessica Alba, Lori Harvey, Jean Smart and Halsey.

The Amazon streaming platform began teasing the show in 2019, with an official announcement on Aug. 21.