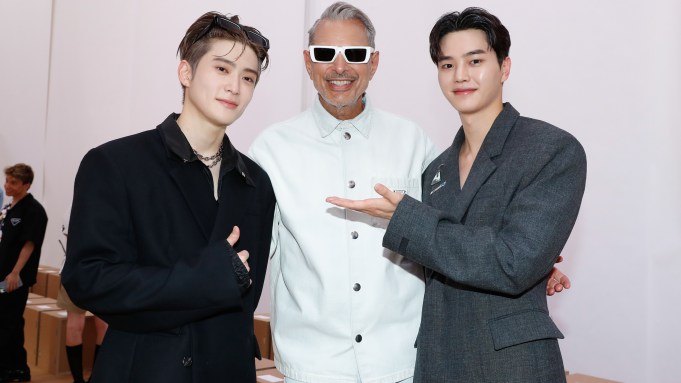 PRADA FRIENDS: Prada had quite the front row, with Jeff Goldblum and his wife Emilie Livingston, Damson Idris and Rami Malek taking in the collection on Sunday. The actors front the brand’s fall 2022 advertising campaign. Goldblum, asked how he felt about turning more and more into a model, since he also walked the runway for that collection in January, smiled and responded: “I am a lucky, small little collaborator with the genius that is Mrs. Prada and Raf Simons. It doesn’t even feel like work to me, it’s just a joy — I enjoy it very much, I sure do.”

Goldblum has a strong connection with Italy. “I love Italy. I was with Wes Anderson in Cinecittà doing ‘The Life Aquatic With Steve Zissou’ and even before that, I did a publicity tour with Michelle Pfeiffer at Cinecittà and watched Fellini shoot a day at the studio on ‘Ginger and Fred’ when we were there and it was great.”

In the Prada campaign, the actors were put in a visual dialogue with a teddy bear (Goldblum), a balloon with a spiderweb print on it (Idris) and a lit up birthday candle (Malek). Asked about the significance of the latter, Malek said, “We were just talking about birthdays and celebrations and I think it’s nice for us to have these beautiful moments when we get to celebrate one another and a candle felt right for that moment.”

Malek also downplayed his modeling chops. “It’s more of a reflection of being able to have someone’s art and creativity have space on my body and that influence is a beautiful thing to be a part of, especially when it’s Mrs. Prada and Raf.”

Jake Gyllenhaal, who fronts Prada’s Luna Rossa Ocean scent, sat near Malek but declined a sound bite. Just before the show started, Dwyane Wade and Gabrielle Union took their seats, together with Ncuti Gatwa and actor Song Kang and singer Jaehyun from South Korea, who had fans screaming and cheering outside Fondazione Prada.