Once Upon a Time on Wild West 14th Street

Looking back on a store's early growing pains.

Jeffrey Kalinsky and his mother, Sybil.

With his mother, Sybil, sitting in the shoe department, and his brother, Barry, standing in the crowd, Jeffrey Kalinsky on Wednesday at a party celebrating the 20th anniversary of Jeffrey New York, stood on a chair, microphone in hand, and acknowledged his store family, thanking each staffer by name.

Kalinsky said he had to reconcile his outsize ambitions with the realities of New York’s real estate. “I couldn’t afford to be uptown and I didn’t want to be in SoHo,” he said. “I wanted to be somewhere where I could get distribution and could carry all the lines I wanted to carry. And, I needed cheap rent.”

When a broker in 1998 showed him the store’s current space at 449 West 14th Street, it didn’t make a very good first impression. “They brought me through an entrance on 15th Street. It was dark and the space was long,” he said. “I heard my father say, ‘It’s like a bowling alley.’ It was really negative.”

Walking through the space, things started looking better. “I was like, ‘Oh my God, this is 14th Street,” Kalinsky said. “In 1975, I bought my Bar Mitzvah clothes on 17th and Seventh Avenue. I thought, ‘They [customers] can come a little farther.’ I knew this was it.”

Kalinsky recalled standing in the middle of West 14th Street with his arms open wide. “There was no traffic,” he said. “Cars didn’t come here. I stood there and thought, ‘I’m going to f–king conquer this. I remember thinking, This is going to be the center of New York one day.”

Two decades later, Kalinsky’s prophecy finally seems to be coming true. While the Meatpacking District‘s popularity has waxed and waned over the years, the arrival of the Whitney Museum of American Art and the High Line has helped attract retailers such as Hermès and Loro Piana. 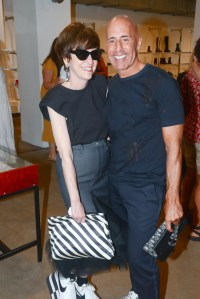 “You have to support pioneers,” said Fern Mallis. “I knew his reputation from Atlanta. Since Day One, it’s had the most impressive edit of shoes, jewelry and ready-to-wear. He hired the best salespeople from boutiques cross the city, which was very smart.”

“Some would say we’re like an old married couple. We know each other so well,” said David Rubenstein, Jeffrey New York’s vice president merchandise manager. “We can be in an appointment and we don’t even have to speak. We know what the other is thinking.”

Seed Inc.’s Ellen Carey said, “I’m really proud. Jeffrey did everything he said he was going to do. [The store] has moved me forward in terms of my fashion.”