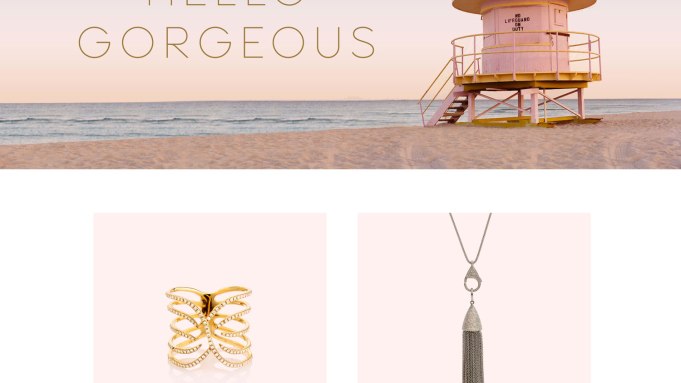 Jewelry designer Jen Hansen, who founded the Peppina line in 2004, has relaunched her company, along with brand extensions JH, Diamond and Jen Hansen Fine, under her own name. Hansen, who divides her time between her native Chicago, her company’s headquarters in Austin, Tex., and her design studio in Los Angeles, also will launch a new web site July 1 featuring e-commerce for all four of her collections.

Hansen started her business with Peppina, named after her grandmother, which featured statement necklaces and earrings based on organic shapes and one-of-a-kind natural gemstones such as laborite, pearl and opal set in 22-karat gold or rhodium-clad metal. Pieces often incorporate organic materials such as wood and stone in moon, tusk or saber-tooth shapes. That line is now known as Peppina Originals and ranges from $165 to $895.

In 2013, Hansen started the edgier and more expensive “Diamond” line, incorporating pavé along with sliced and rose-cut diamonds, oxidized sterling silver and unpolished gemstones, wood and horn. Retail prices range from $595 to $12,995. In 2015, she launched the more delicate “Jen Hansen Fine,” which uses white pavé diamonds and 14-karat yellow, rose and white gold for $595 to $3,695.

The JH diffusion collection offers costume jewelry versions of the aforementioned pieces using black-and-white cubic zirconia, semiprecious stones, 14-karat yellow and rose gold vermeil and sterling silver. Retail prices range from $98 to $360. Some of Hansen’s earliest retailers include Ron Robinson, where JH is among its top-selling lines. Most pieces are Made in America.

Hansen’s designs have been worn by celebrities including Jessica Alba, Alessandra Ambrosio, Drew Barrymore, Julie Bowen, Hilary Duff, Selena Gomez and Heidi Klum. Hansen, who serves as designer and chief executive officer of her privately-owned company, also devotes part of her new website to charity initiatives including the International Justice Mission and Pencils of Promise that aim to aid victims of human trafficking and provide education.

“Once my business became profitable, I wanted to be able to give back more, which in turn has motivated me to keep growing the business,” she said.