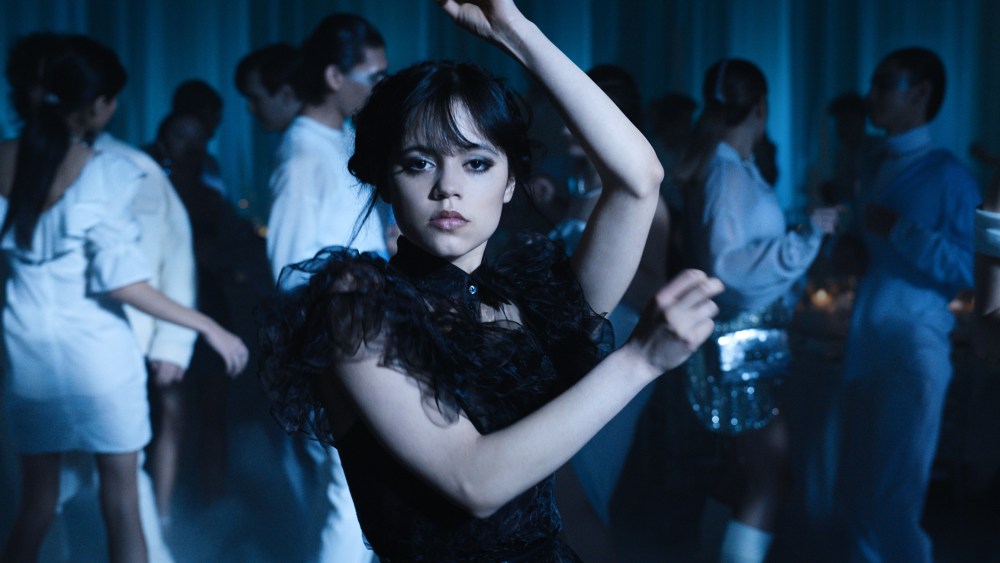 “Wednesday” is already on its way to becoming one of the most watched Netflix series of all time.

A report from the streaming platform on Nov. 7 said the show has become the number-three most watched English-language TV title in the network’s history.

“Wednesday,” which was released on Nov. 23, stars Jenna Ortega in the lead role and takes inspiration from the original Addams Family comics, which was created in 1938 by cartoonist Charles Addams. The spinoff show draws slightly from the 1991 “Addams Family” film, which starred a young Christina Ricci as Wednesday.

Since then, the Addams family hasn’t gone through many style iterations, but in this new series, lead costume designer Colleen Atwood reimagined the female characters through a modern lens, while paying homage to their original ties.

In designing for the Wednesday character, Atwood used the series storyline of a new, more colorful setting as a way to amplify Wednesday’s dark aesthetic even more.

“The show opened with [Jenna Ortega] in sort of a nod to the expected Wednesday,” Atwood said. “We made the collar a little pointier, the dress a little different-shaped than the previous one and coupled it with more contemporary, clunkier shoes to set her aside. She was placed in an environment that was really different than what you’d seen before. All that color around her made it feel a little darker and a little bit more offbeat.”

Atwood incorporated changes to Wednesday’s signature hairstyle and created new outfits for outside of the character’s typical schoolgirl look.

“We gave her bangs to kind of soften it and make it more kind of ‘today’ in that way,” Atwood explained. “Once she got into the off-campus casualwear, it opened up making a young Wednesday Addams sort of accessible and a real girl rather than this iconic character.”

When it came to designing looks for the matriarch of the Addams family, Morticia, played by Catherine Zeta-Jones, Atwood went through many design alterations before finding the perfect look.

“I made the dress in two or three fabrics before I really got it how I wanted it to be — I was trying to take it out of the jersey kind of vibe,” Atwood said. “I tried it in leather, satin and a couple of other materials, but I went back to jersey because its weight, the way it draped and what I could do with it was the best choice.”

Atwood bonded the jersey dress material with metallic fabric to offset the typical black dress the character is known for wearing. “It kind of took Morticia to a more real place, more ‘mom.’ I mean, she is a mother.”

Other standout fashion moments from the series come from new characters, including Larissa Weams, the principal of Nevermore Academy, played by Gwendoline Christie. Earlier this month, Christie told “Entertainment Weekly” that her role in the recent Netflix series was the first time she’s ever felt “beautiful” on-screen.

“I met Gwendoline and I had this poster in my living room of the birds from the ’60s and it was Tippy Hedren with her hairdo up in this high collar. I said, ‘Somehow, I see you in this world.’ Then we spun off on that because I thought that’s who Weems was in this little town, that no matter where she was in the world, she would always look good,” Atwood said. “She and I really collaborated. We gave her a more kind of ’60s shape with a harder waist.”

As for the most memorable moment of the new series, Ortega as Wednesday can be seen swaying and dancing in a billowy gothic dress to the song, “Goo Goo Muck” by The Cramps. The quirky dance has gone viral on TikTok, scoring more than 14.2 million views from the network’s official account. Lady Gaga, clad in Valentino, shared her version on Thursday on TikTok and received nearly 3 million views overnight.

Atwood pondered on how to custom design a vintage-inspired prom dress for the “Raven’s” school-dance scene, but ended up buying it from Alaïa on Bond Street in London.

“I had to do some modifications to the top of it to make it work for dancing and stuff, and also scale down the ruffles because Jenna’s really tiny,” Atwood explained. “I knew how the fabric would move and it was kind of a model black and brown, which I really like, instead of being solid black,” she said of the partially chiffon material.

Mobility wasn’t the only challenge. The scene includes a downpour of blood. “Of course, my work crew wanted to kill me because it had to get blood on it. We had to make copies of it and it was a lot of work,” she said.

“Wednesday” is available to stream on Netflix now.