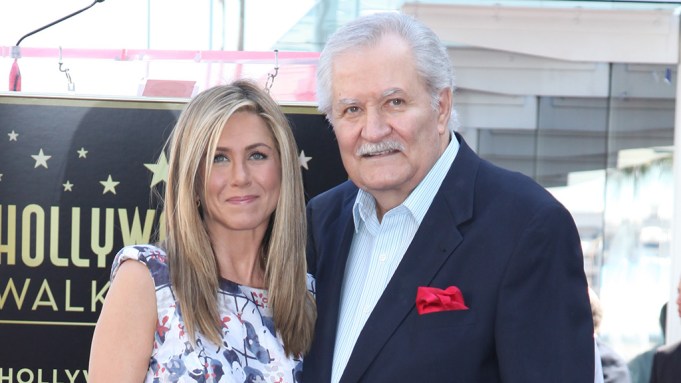 Before Jennifer Aniston rose to fame on “Friends,” her father John Aniston was a daytime television staple on “Days of Our Lives.” After almost four decades on the popular soap opera, John Aniston received a Lifetime Achievement Award during the 2022 Daytime Emmys on Friday.

So happy that Jennifer Aniston has a video speech to honor her father John Aniston with this award! #Days #DaytimeEmmys pic.twitter.com/IHQwtsXKGW

The actor’s Lifetime Achievement Award was presented by his daughter via video, with a featured montage of some of his most notable moments on the series.

Viewers of “Days of Our Lives” know the 88-year-old actor as Victor Kiriakis, a character originally introduced in 1985 as a “villainous crime lord” who gradually developed into a fan-favorite character celebrated for sarcasm, wit, and one-liners. Aniston has played the role for 37 years.

But Kiriakis actually wasn’t Aniston’s first role on the decades-long series. The actor first appeared on the soap opera in 1969 — which is the same year Jennifer Aniston was born — playing a limited-run character named Eric Richards. Aniston then returned to the series as Kiriakis in 1985, and has stayed active on the television series ever since, though his character has taken on a lesser role over the years. Aniston has been credited in more than 3,780 episodes of “Days of Our Lives.”

John Aniston has also had a prolific career outside of “Days of Our Lives,” playing roles on various television shows throughout the years including “The West Wing,” “Gilmore Girls,” “Cold Case,” and “Mad Men.”

The Daytime Emmy Award is an annual award show celebrating the best of American daytime television. The award show also includes the Daytime Creative Arts Emmy Awards under its umbrella, which are a class of Emmy Awards presented for daytime television production and technical achievement. Leading the television nominations are “The Young and the Restless” with 18 nods, followed closely by “General Hospital” with 17 nods. “The Kelly Clarkson Show” and “The View” each have nine nods, the highest of any nominated talk shows. The Daytime Emmys air on Friday, June 24.