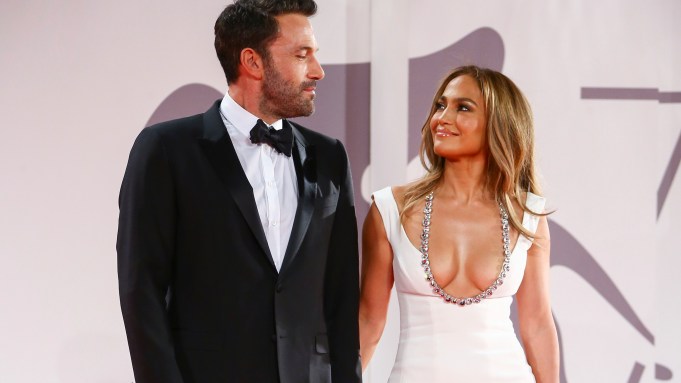 Congratulations to Jennifer Lopez and Ben Affleck, who recently announced their engagement.

Lopez revealed the news on her newsletter, On the JLo, which was accompanied by a video of her showing off her new ring, which was a green stone on a silver band. She notes that the color is special to her because it’s her favorite.

“I always say the color green is my lucky color. Maybe you can remember a certain green dress,” Lopez said, referring to her now-iconic green Versace dress from the 2000 Grammys. “I’ve realized there are many moments in my life where amazing things happened when I was wearing green.”

Lopez and Affleck rekindled their relationship in April 2021, shortly after Lopez ended her engagement to former MLB star Alex Rodriguez.

The couple caused a social media frenzy when they made their official red carpet debut during the Venice Film Festival last September. Lopez wore a Georges Hobeika couture dress from its fall 2021 collection and topped the look off with a diamond bracelet, earrings and ring from Cartier and metallic silver Jimmy Choo platform heels.

Prior to that, they kept their relationship relatively private, with the exception of a few birthday photos Lopez uploaded on her official Instagram account.

This marks the second time the couple has been engaged. The two were together from 2002 to 2004 and were one of the buzziest couples of the early Aughts era, with tabloids referring to them as “Bennifer.” They were engaged in 2002 and had a wedding date set for September 2003, but it was ultimately postponed due to high media attention. In January 2004, the two called off the engagement.

Lopez and Affleck’s relationship rekindling was also emblematic of the resurgence of Y2K trends in fashion, as well as other facets of popular culture, within the last year.

Since last September, Lopez and Affleck have taken on multiple star-studded events together, including their own movie premieres and sporting events.

Click through the gallery above to see some of Jennifer Lopez and Ben Affleck’s most stylish moments over the years.