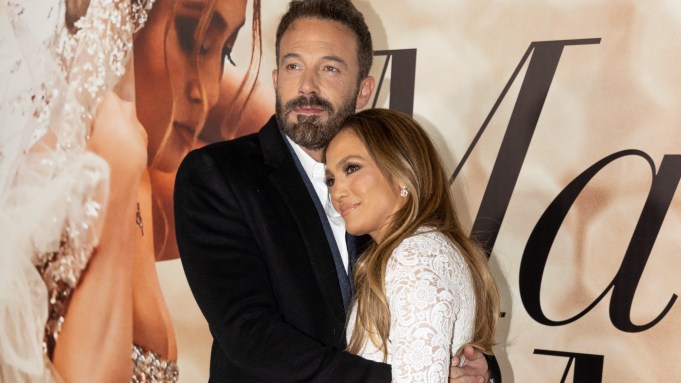 Jennifer Lopez and Ben Affleck have said “I do” once again.

A month after they officially tied the knot in a Las Vegas chapel, the couple celebrated their nuptials with another ceremony in Georgia, with multiday festivities and a star-studded guest list over the weekend.

The couple’s second wedding was held at Affleck’s 87-acre compound on Hampton Island Preserve in Georgia.

The weekend reportedly kicked off with the two hosting a rehearsal dinner on Friday. The following day, Lopez and Affleck exchanged vows in front of their family and close friends. The ceremony was followed by a reception, and celebrations concluded with a picnic and barbecue on Sunday.

For the special day, Lopez looked to Ralph Lauren for a custom wedding gown, which featured cap sleeves, an open-back design and a flowing train with ruffles. She topped off the look with a sheer, cathedral-length veil.

Among some of the guests that attended, many of whom arrived on Saturday and stayed in Savannah, include Matt Damon and his wife Luciana Barroso, Jimmy Kimmel, Jason Mewes and his wife Jordan Monsanto, and Kevin Smith, among others. Both Lopez and Affleck’s children were also present. All were dressed in white to adhere to the all-white dress code for the weekend.

The wedding was extremely private as the couple reportedly purchased permits to block airspace and river access to the estate.

The celebrations come after the couple’s honeymoon in France last month.

In July, Lopez announced in her newsletter, On the JLo, the couple had a surprise and intimate wedding in Las Vegas, held at the Little White Wedding Chapel. She wore two dresses for the ceremony, one was by Alexander McQueen while the other was by Zuhair Murad.

“We did it,” she wrote. “Love is beautiful. Love is kind. And it turns out love is patient. Twenty years patient. Exactly what we wanted. Last night we flew to Vegas, stood in line for a license with four other couples, all making the same journey to the wedding capital of the world.” The couple announced their engagement in April 2021. The two were previously together from 2002 to 2004 and were one of the buzziest couples of the early Aughts era, with tabloids referring to them as “Bennifer.” They were engaged in 2002 and had a wedding date set for September 2003, but it was postponed due to high media attention. In January 2004, the two called off the engagement.