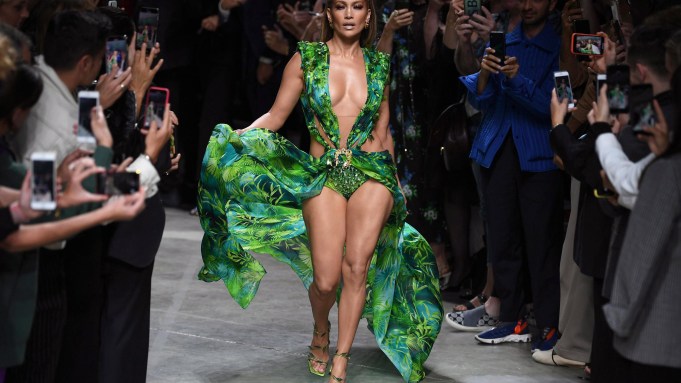 Almost 20 years after she made headlines in the dress that changed the Internet as we know it, J.Lo closed the runway at Versace’s spring 2020 show in a reimagined version of her iconic plunging Versace dress she wore to the Grammy Awards in 2000. The jungle-inspired dress — arguably one of the most famous red carpet looks of all time — is said to have been the impetus for the creation of Google Image Search.

Scroll Down to Watch Jennifer Lopez Walk the Versace Runway

“I found out that because of that night and because of that dress, Google Images was actually created,” Lopez said on her YouTube channel in April. “That so many people went searching for this and they had nowhere to search a picture at that time on the Internet, they created Google Images.”

In 2015, former Google chief executive officer, Eric Schmidt, wrote in a blogpost on Project Syndicate about Lopez’s dress. “At the time, it was the most popular search query we had ever seen, but we had no surefire way of getting users exactly what they wanted. J­.Lo wearing that dress, Google Image Search was born.”

According to Quartz, at the launch of Google Images in 2001 the site gave access to 250 million images. By 2010, the number increased to more than 10 billion. The dress catapulted Lopez into a fashion icon and continues to be referenced after nearly two decades. Versace itself paid homage to the dress in July by creating a pair of sneakers inspired by the look, and Fashion Nova has re-created the style as a 2019 Halloween costume.

Friday’s Versace show centered on the palm tree print collection — one of the early collections designed by Donatella herself after the death of her brother Gianni Versace in July 1997. Amber Valletta, who modeled the original dress on the runway, was also a model on the runway Friday wearing a plunging black column dress similar to the one famously worn by Cindy Crawford at the 1991 Oscars.

After the models exited the runway at Friday’s show, a voiceover of Donatella Versace filled the room, stating “Google, show me pictures of that green Versace dress.” Images then flooded the video screens and Versace’s voice was back to ask to see the real thing. Lopez then took the runway in the reimagined Versace green dress, walking down the runway with Donatella Versace herself to a standing ovation.

This isn’t the first time Versace has had a throwback moment during a fashion show. To honor her late brother, Gianni Versace, on the 20th anniversary of his death, Donatella brought together Nineties supermodels, Naomi Campbell, Claudia Schiffer, Cindy Crawford, Carla Bruni and Helena Christensen to close the spring 2018 show in matching metallic gold gowns.

Additionally, it’s been a busy year for Lopez. Just this month, she debuted her highly anticipated film, “Hustlers,” at the Toronto International Film Festival — which is now generating Oscars buzz for her role as stripper and scammer, Ramona — and she was awarded the Fashion Icon Award at the CFDA Awards in June. She also got engaged to longtime boyfriend, baseball player Alex Rodriguez.